Humiliation and Dignity in International Relations 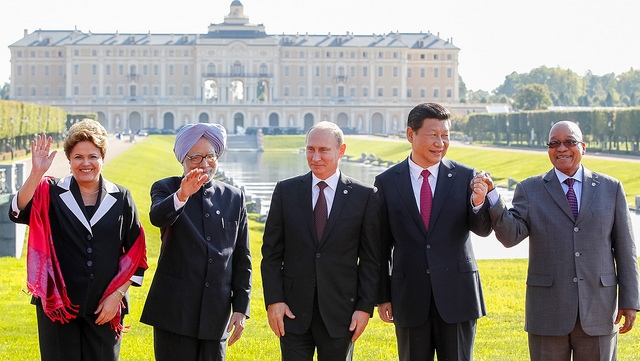 There is an undercurrent in the story of the BRICS in the cultural and political backdrop to international relations that runs deeper than the who-is-up-who-is-down tale of what were once called “emerging markets.” Like all economies, they are up one day, down the next. There is more at stake in these countries than the strength of their markets; the countries’ collective psychology, “national will,” perception, including the self-perception, of social success all contribute to the cultural and political backdrop the BRICS are faced with.

The fate of nations and peoples has been described in such terms—“rise and fall”—referring not only to economies and states, but also to cultures and even entire civilizations. This is not at all new. The rise of one people has long been seen as taking place at another’s expense.

So, as we now read that BRICS have given way to MINTs and CIVETs another question demands an answer. Today’s categories and markers of global success—what used to be called progress—have significant cultural associations, having as much to do with the capacity of particular cultures to “rise” under particular circumstances as they do with the determination to do so. Much of this derives from a sense of where they have originated.

The word “humiliation” comes from a Latin word meaning “low,” and has affinities with the words “humble” and “respect.” To humiliate implies lowering a person or group’s self-respect and sense of dignity. It is a powerful derogatory force. It can also, however, awaken a desire and a movement to remove its stigma, and to remove with the causes of humiliation.

In modern history we have come to associate redressing the humiliations of the past and present with social and political revolution. American revolutionaries in 1776 pledged their lives, fortunes, and “sacred honor.” From the French Revolution to the revolutions of 1848, and to the Russian Revolution and beyond, the demand for bread was accompanied by more virulent calls for an overturning of existing hierarchies along with loud demands for respect and renewal.

China offers one of the most striking and important examples. Orville Schell and John Delury in their book Wealth and Power. China's Long March to the 20th Century examine the work of an early nineteenth century scholar Wei Yuan in exactly these terms.

One incident they describe—the destruction of the emperor’s famed Yuanmingyuan gardens in 1860—was deliberately intended as an “act of humiliation.” Especially, one can imagine its power given the importance of “not losing face” in Chinese culture. Today, visitors to the garden will find a signpost admonishing them: “Do not forget our humiliation.”

Wei Yuan accepted the need to draw strength from humiliation and have it “become transformed into a positive force—transformed from a depressant to a stimulant—in the construction of a new and modern national identity.” Often called “self-strengthening,” this transformation was to be achieved by studying the sources of Western strength and incorporating them in a Chinese context. Adapting to modernity would be the larger heading under which this process might be understood.

This adaptation also figures in the case of Iran. This dated from the Russian and British control over the country during the age of imperialism to the later American and British inspired overthrow of Mohammed Mosaddegh, seen in the West as too left-wing. The Shah was seen by many as the West’s lapdog. When the Ayatollah Khomeini seized power as a consequence of an Iranian revolution, he converted the Iranian revolution into an Islamic Revolution, brining a sense of humiliation to the surface. Khomeini thundered against the “humiliation and insult” involved in borrowing from the West.

Much of the Middle East has demonstrated the same reaction to modernity. The fact is, of course, that much of modernity was in the baggage carried by imperialists as they took power—and oil—in the region, and used as an excuse to be overcome by the West, the lack of modernity being viewed as “barbarian”. Any modern history of the Middle East will offer numerous particular examples of “humiliating” behavior on the part of the Western meddlers and those closer to home decried as Western puppets. It is in this context that one should view the popularity of secular nationalism and later political Islam.

Some in the West have spoken of a “dignity agenda” meant to encompass not only political and cultural values but also economic ones. In part, this comes from a desire to forestall revolution in preference for a liberal evolution along the BRICS model. It is not difficult to imagine the reaction to this among some people whose countries were once called “underdeveloped” and “developing”: surely it adds additional insult—in the form of yet another patronizing recipe for progress—to injury? Not necessarily.

For if it has done anything, the story of the rise and fall of the BRICS during the past decade shows us that their fate is inseparable from that of much of the rest of the world. Discussions about the “West and the rest” have an academic, almost theoretical, nature. In actual international relations, where the world has reached a point of global interconnectedness unsurpassed since the late nineteenth century, the rise or fall of each part of the globe has some effect on nearly every other part. We have come to depend, to some extent, on one another, and on collective cycles of progress.

Such a world cannot afford the luxury of willful humiliation, either between nations or cultures, or within them. It also cannot sustain an “independent” path of “self-strengthening” in the name of redressing affronts of the past. As psychologists like to say, it is about time we all move beyond these prejudices of time and place, especially if they demand a counter-humiliation. A true dignity agenda means that we are all BRICS now.

Bruce Mazlish is Professor Emeritus of History at the Massachusetts Institute of Technology. Kenneth Weisbrode is a writer and historian.

About
Bruce Mazlish
:
About
Kenneth Weisbrode
:
The views presented in this article are the author’s own and do not necessarily represent the views of any other organization.
keep reading
More on
//
View all
Breaking News
Channel |
Diplomatica