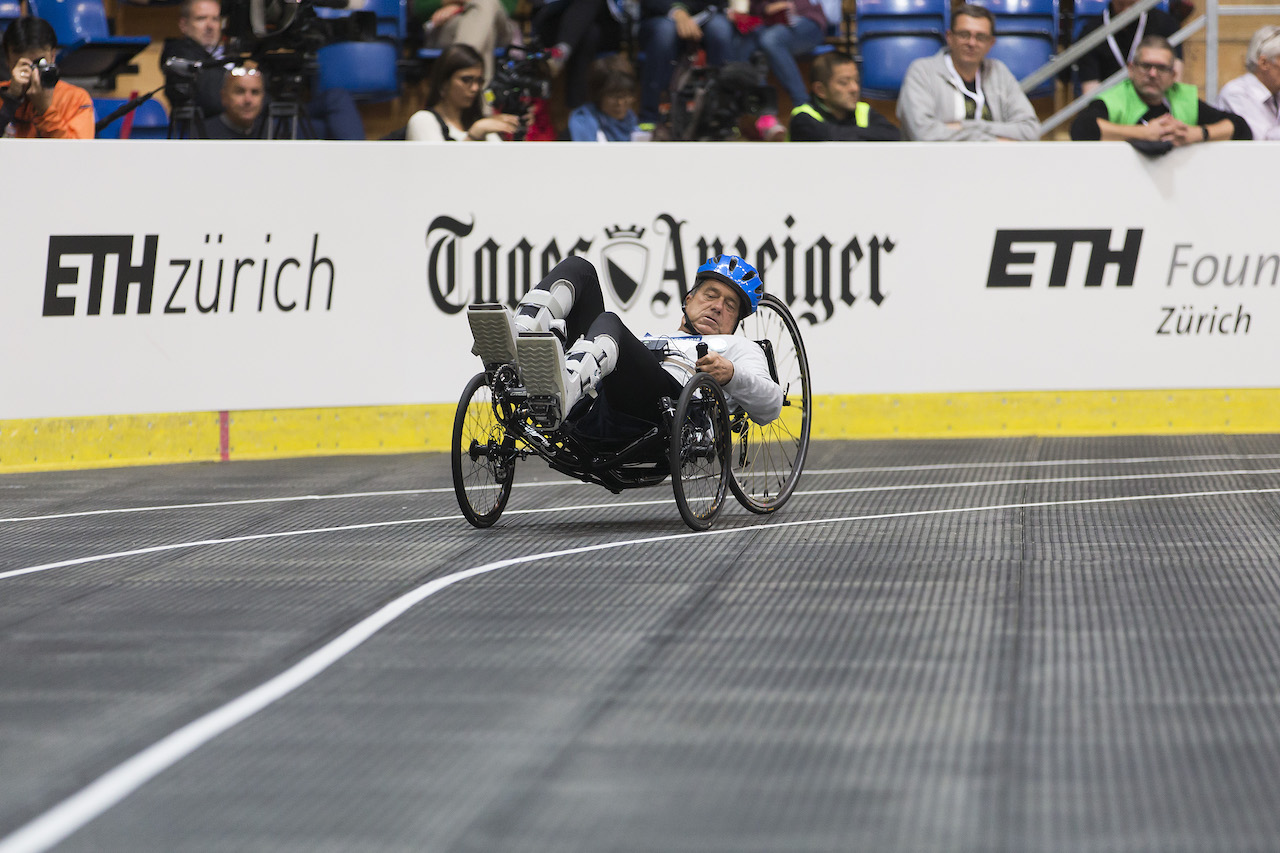 lato had it right when he said, “Necessity is the mother of invention.” Six years ago, I read a fascinating account of Zac Vawter’s 103-story climb to the top of the Willis Tower in Chicago while wearing an experimental prosthetic leg. As a biomedical engineer and professor of Sensory-Motor Systems at ETH Zurich and University of Zurich, my 30-person lab and I were working on similar advanced technologies including prostheses, exoskeletons, neuro-stimulation, and powered wheelchairs. Inspired by Vawter’s climb and with a renewed sense of energy, I approached my research team with the idea of formulating a similar competition in Switzerland. With the noble goal of raising public awareness for people with disabilities, I also wanted to demonstrate how our research addresses some of the specific needs of this segment of society.

My team and I moved forward, but it was not until I spoke with an acquaintance about the challenges he faced with his hook and cable-driven prosthetic arm that I realized there was a deeper, more meaningful mission ahead of me. While his prosthetic arm worked well for large movements, it was incapable of handling everyday tasks that require fine motor skills and bimanual coordination like carrying large objects or reaching into his wallet for cash. I realized that we needed to demonstrate the limitations that people with disabilities face in coping with everyday life and promote their inclusion in society. It was from this humble perspective that I founded the Cybathlon—an Olympic-style competition to facilitate the advancement of novel assistive technologies. Cybathlon hones in on advancing technologies for people with motor or sensory-motor disabilities creating a platform where they can engage in a meaningful dialogue with scientists, engineers, and society.

Despite the prevalence of robotics in pop-culture, cyborgs like the Terminator and Iron Man exist only within the pages of science fiction novels, comic books, and the movies. The field of robotics is still very much in its infancy and while assistive technologies have come a long way, they are still in the early stages of growth. The barriers in everyday life—opening doors, climbing stairs, and even making breakfast—still pose a tremendous challenge both for people dealing with motor impairment and for assistive tech developers.

In addition to increasing the awareness of the needs of the disabled, the Cybathlon accelerated the development of assistive technologies. In 2015, we organized a rehearsal inviting research teams from around the world to test their new tech on different racetracks in a stadium and to refine the event disciplines. In contrast to the Paralympic games, we designed the Cybathlon events to embrace the use of any kind of technological aid. The aim of the competition was to enable teams to demonstrate how advanced technologies help to overcome the challenges of everyday life—challenges such as hanging laundry, slicing bread or going up and down steps.

At that time, only one team had developed a stair-climbing wheelchair. A year later, at the official 2016 Cybathlon, 12 powered wheelchair teams participated 11 of which had stair-climbing technical capabilities. The first of its kind, the 2016 Cybathlon attracted 4,600 spectators in a sold-out stadium and 70 pilots—disabled persons who competed using novel assistive devices such as a brain-computer-interface (BCI), bikes driven by artificially stimulated muscles, powered arm and leg prostheses, exoskeletons, and powered wheelchairs.

Researchers and developers from 25 different countries along with their pilots formed 56 teams. More than 150 members of the media covered the event resulting in 8 hours of live television coverage in Switzerland, Germany and Austria. The technology show, BBC Click produced a full-length episode and interviews appeared on CNN, in the New York Times, the Yomiuri Shimbun, and the Wall Street Journal. CBS produced an episode on the Cybathlon for their series, “Courage in Sports” and Engadget produced an online series called, “Superhumans,” just to name a few. Nature and Science published scientific articles and three other journals responded with special issues featuring the development of technologies from different teams participating in the event. The West African country of Sierra Leone even issued a series of postage stamps featuring images from the world’s first Cybathlon. The BBC named one of the event’s images as “the most striking picture of the year.” Finally, the 2018 Guinness Book of World Records gave the Cybathlon a special mention and the organizers won awards such as the European Excellence Award and the Yahoo Sports Technology Award.

A Shift to a “Real World” Lab

The Cybathlon introduced a paradigm shift in biomedical research changing the way assistive technologies are developed and benchmarked. Placing people at the heart of the research process, developers began to work directly with people who need and use assistive technologies. Most current assistive devices lack the type of functionality required of users leaving them feeling disparaged or even rejecting technological solutions altogether. We found that communication between developers, the impaired, and clinicians improved adaptation and resulted in solutions that overcome barriers in public environments. The process enabled a better understanding of day-to-day needs and furthered the development and refinement of technologies to meet those needs.

Working side-by-side presented an opportunity for mutual understanding both of the functional needs of the pilots, as well as the technological limitations that engineers face. The exchange served as a tremendous motivator. You see, each pilot has a compelling personal story of survival. Such stories evoked empathy and inspired innovation. During the Cybathlon, developers and spectators alike cheered on the pilots and the tears flowed. The races represented the culmination of a long journey and speed seemed irrelevant. Individual stories such as these ones have minimized societal and cultural differences and reminded competitors of their shared humanity:

“I was snowboarding, hit a patch of ice, went down a 40-foot embankment, kissed a bunch of trees and came out as a C6, C7 quadriplegic.” (From a member of Team Cleveland)

Werner Witschi, a Cybathlon pilot for VariLeg, was up on the roof of a saw mill laying solar panels with his team. “I took one step,” he paused to reflect, “and I remember crashing through the roof. I fell 6 meters (18 feet) to the ground.” (ETH Zurich)

“Vance Bergeron (FES pilot for ENS de Lyon) was once an amateur cyclist who rode 7,000 kilometres per year—much of it on steep climbs in the Alps. But, in February 2013, as the 50-year-old chemical engineer was biking to work in…Lyon, France, he was hit by a car. The impact sent him flying through the air and onto his head, breaking his neck.” (Nature)

Who better motivated to provide feedback than someone who directly benefits from the mobility offered by new life-enriching technologies?

The competitive spirit of the Cybathlon has not only fostered a rich international collaboration, it shifted the focus of research groups beyond the lab and scientific publications to a broader and ongoing discussion with society on assistive technologies, accessibility, and technology-enabled independence. Since the first competition in 2016, the Cybathlon organizers have continued the dialogue offering a series of Cybathlon symposia, exhibitions, and race demos featured in major venues around the world including the Winter Olympic Games in PyeongChang and the World Robot Summit in Japan. Cybathlon 2020 anticipates close to a hundred teams from 20 countries to participate in a two-day competition in Zurich, Switzerland.

Goodwill is a natural by-product of a collaborative competitive event like the Cybathlon. In 2016, teams from Hong Kong to Iceland and from Brazil to China—engaged in both a friendly and competitive exchange. Cybathlon 2020’s Powered Exoskeleton race places the USA head to head with Russia and the foresees a South Korean team facing China. Commonly used for furthering diplomatic agendas, in this case, science diplomacy wields a source of soft power that strengthens and fosters foreign relations.

Cybathlon’s emotional impact sheds a light on the value of both collaboration and competition to drive innovative assistive technologies. The World Health Organization estimates that greater than 1 billion people in the world today are dealing with some form of disability—an issue that knows no borders. If Louis Pasteur were alive, perhaps he might say that technology belongs to humanity just as he observed, “Science knows no country because knowledge belongs to humanity and it is the torch that illuminates the world.” The Cybathlon continues to illuminate the world, join me and teams from around the world in May 2020.

About
Robert Riener
:
Robert Riener is a Biomedical Engineer & Professor for Sensory-Motor Systems, ETH Zurich.
About
Marianne Lucien
:
As the International Communication Officer for ETH Zurich, Marianne Lucien engages international media, designs global communication strategies, and writes on science and technology.
The views presented in this article are the author’s own and do not necessarily represent the views of any other organization.
keep reading
More on
Health
//
View all
Breaking News
Channel |

Quarantine and the Supply Chain