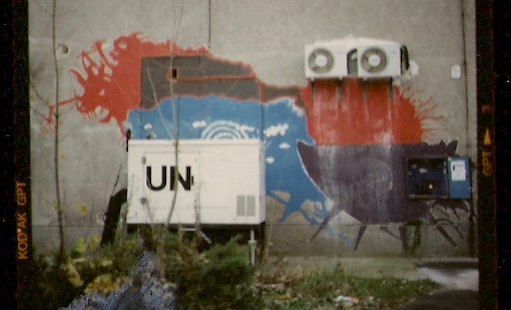 .
It has been said that the Balkan region produces more history than can be consumed locally. Much of the world would prefer to forget the bloody breakup of former Yugoslavia, if only to escape the competing versions of history that members of the various communities seem so inordinately fond of reciting. Fresh and constructive approaches to current problems and future prospects are smothered when the dead hand of the past continues to exert a tenacious grip on the present. Unfortunately, that remains the case with the Balkans, where outsiders—notably the American and European foreign policy establishments—insist that the future must be strictly confined by reverence for past idols. Two such idols stand out: First, that the United States and NATO intervened in Bosnia and Herzegovina in 1995 to rescue European failures, and brought “peace” by imposing the Dayton Agreement. In fact, in 1992 Washington played a key role in touching off the Bosnian war and was instrumental in prolonging it, notably through the April 1994 “green light” for Iranian arms shipments in violation of a U.N. embargo. Second, that in Kosovo in 1999 the U.S.-led NATO war was the textbook example of a successful “humanitarian intervention.” In fact, far from stopping a claimed “genocide” of Albanians in Kosovo—a claim about as real as Saddam Hussein’s WMDs—intervention precipitated a genuine eradication of most of the province’s Serbian community, along with Roma and others. Worse, the “Kosovo precedent” became the template for actions elsewhere in contravention of the international legal order—notably the authority of the Security Council—in Iraq, Libya, and now in Syria. On the global level, these idols established the dangerous notion that “American exceptionalism” means that the rules of international conduct do not apply to us, and that whatever we do is right because we claim as our goals promotion of “democracy” and “human rights.” On the local level, they established in the Balkans two simple identity-based rules and one corollary, where right and wrong are determined not by actions but by the identities of the actors and of those acted upon. These continue in force today, including disparate treatment of accused war criminals, and include: “Rule Two” is a complex phenomenon, with application well beyond the Balkans, dating back at least to American support for the 1980s anti-Soviet jihad in Afghanistan and continuing in Syria today. It remains a pillar of U.S. policy, despite abundant evidence that such favoritism leads not to the expected gratitude but to blowback, starting with the birth of al-Qaeda itself, and most recently in the conflict in Mali and the Algerian hostage crisis as fallout from NATO’s intervention in Libya. In applying “Rule Two” in the Balkans, the U.S. has been explicit in its subjective intention to help Muslim communities and movements because they are Muslim. For example, as stated by then-House Foreign Affairs Chairman, the late Tom Lantos (D-CA), at a 2007 hearing on Kosovo:

Here [Kosovo] is yet another example [i.e. “yet another” after Bosnia] that the United States leads the way for the creation of a predominantly Muslim country in the very heart of Europe. This should be noted by both responsible leaders of Islamic governments, such as Indonesia, and also for jihadists of all color and hue. The United States' principles are universal, and in this instance, the United States stands foursquare for the creation of an overwhelmingly Muslim country in the very heart of Europe.

In contrast, objective reality starts with the fact that Bosnia is not a “Muslim country” but has a Christian majority, if one adds Orthodox Serbs and Catholic Croats together. No matter: as recently as November 2012, Washington supported a plan for greater centralization of Bosnia and further marginalizing Serbs and Croats. Similarly, American and European policymakers can think of no better solution to Kosovo than pressing for more recognitions of the separatist administration in Pristina while hammering away at Belgrade’s already feeble resistance to amputation of its province. Today, such simplistic approaches serve only to keep alight fond memories of the idolized “successes” of the 1990s. They do little to promote good governance in post-Yugoslav states, communities, and families plagued by corruption, organized crime, pervasive bureaucracy, and economic stagnation, below which papered-over communal tensions will continue to smolder. James George Jatras is a government and media relations specialist in Washington. He formerly served as a foreign policy adviser to the U.S. Senate Republican leadership and as a U.S. diplomat. He is director of the American Council for Kosovo. This commentary is adapted from his remarks at a roundtable conducted by the Universal Peace Federation on January 30, 2013. Photo: Mural for student radio station in Bosnia and Herzegovina, 1997. Elvis Dolich/Radio Nederland Wereldomroep (cc).
About
James George Jatras
:
The views presented in this article are the author’s own and do not necessarily represent the views of any other organization.
keep reading
More on
Opinion
//
View all
Breaking News
Channel |
Diplomatica