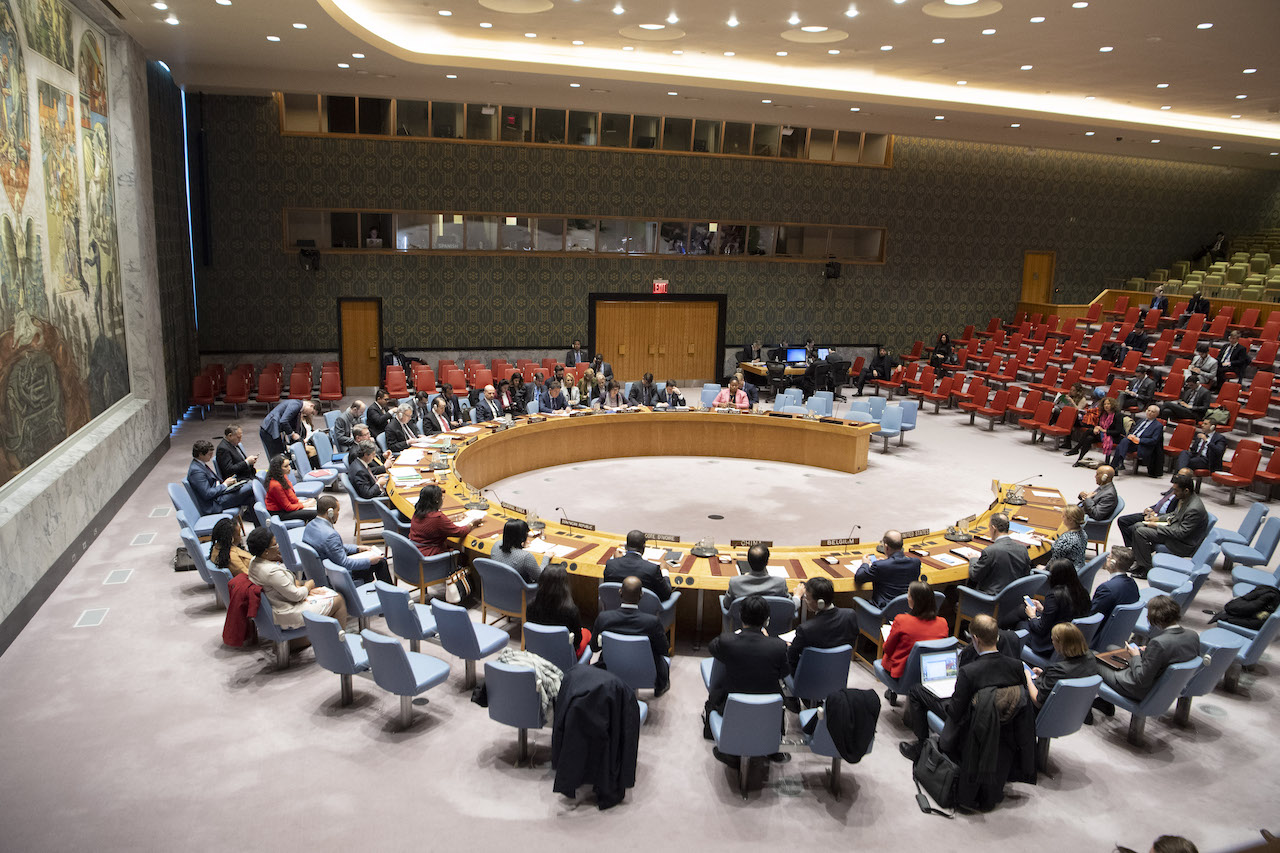 United Nations, New York: A wide view of the UN Security Council meeting on the situation in the Sudan and South Sudan. UN Photo by Eskinder Debebe.

Just over a month after blood stained the streets of Khartoum, jubilation echoed across the city. People took to the streets once again on July 5, 2019, this time to celebrate a peace deal made between Sudan’s military leaders and its national protest movement.

ust over a month after blood stained the streets of Khartoum, jubilation echoed across the city. People took to the streets once again on July 5, 2019, this time to celebrate a peace deal made between Sudan’s military leaders and its national protest movement. The recent peace talks attempt to bring structure to a country that’s been rife with unrest since long-term Sudanese President Omar al-Bashir was ousted after months of peaceful protest in April.

The agreement reached earlier this month lays out a plan for how Sudan will be run until its next presidential election, which will take place in a little over three years. Governing power that Sudanese protesters had feared would merely be restored to military forces was instead divided. Though a military general will govern Sudan for the first 21 months of the agreement, a civilian leader will rule for the next 18.

Diplomatic forces helped set the stage for the recent peace deal. The weekend before the July 5 agreement, diplomats from the United States, Britain, Saudi Arabia, and the United Arab Emirates secretly met with both sides of the Sudanese conflict to discuss a peace agreement. However, chaos broke out before both sides could reach an agreement. During a recess in the secret discussions, paramilitary troops operating under General Hamdan, the warlord popularly believed to be responsible for the June 3 raids, broke into opposition offices in Khartoum, leaving Sudan’s future uncertain.

Protesters were unwilling to let Sudan give up on democracy that easily. Tens of thousands took to the streets again on June 30, demanding democracy in the face of heavy military occupation. The wave of support pressured Sudanese generals to talk, and protest leaders agreed to meet again. In the early hours of July 5, African Union mediator Mohamed El Hacen Lebatt announced that both sides had come to an agreement.

Though the July 5 agreement gave many Sudanese cause for celebration after the bloodbath that followed al-Bashir’s removal from power, the promise of democracy in Khartoum may be a piecrust one if that. Large economic and military challenges loom over the country following its preliminary promises of democracy.

Economic concerns were what initially drove many Sudanese to the streets in late 2018, with many protesting food shortages and steep prices. Al-Bashir’s reign was one of gross economic mismanagement and corruption, so it’s not surprising that the protests quickly became focused on removing the long-term ruler from office. Further, the 2011 split that created South Sudan resulted in much of the country’s oil wealth leaving the country with its southern region and creating the worst economic crisis Sudan had seen in decades.

Resolving Sudan’s current economic crisis would require a hearty injection of foreign funding. And Sudan isn’t likely to receive such funding unless its military commits to driving out the remnants of the al-Bashir regime from the country’s civil service, banking, and security forces.

But it’s likely that Sudan’s military poses an even larger threat to potential democracy than the country’s struggling economy.  On July 11, just days after both sides reached a peace agreement, Sudan’s military council arrested at least 16 military officers in an attempted military coup. According to Lieutenant General Gamal Omar, the actors who had attempted to carry out the coup were hoping to block the recent compromise between military and protest forces.

Military action against Sudan’s July 5 deal is not surprising in a country that has mostly been ruled by generals since it gained its independence in 1956, as The National reports. But advocates for Sudanese democracy were worried about the military’s governance role, as decided by the July 5 agreement, even before the attempted coup on July 11. Niemat Ahmadi, an activist and survivor of the Darfur genocide told Vox on July 5 that giving the military control during the first interim period leading up to the presidential elections was “the most dangerous part” of the agreement. Ahmadi pointed out that there’s “no guarantee” the military government will surrender power to civilians when their 21-month term expires. Further, Ahmadi notes that letting the military step in betrays the initial goals of the protest, which sought to return governance of Sudan to civilians.

The wake of the July 5 peace deal leaves Khartoum facing a shaky democratic future. Diplomatic action on behalf of the United States, Britain, Saudi Arabia, and the United Arab Emirates helped set the stage for this deal and return some structure to a nation that’s been wracked by protest and violence for months. Sudan’s looming economic and military anxieties mean that the world must not turn its attention away from Khartoum in the aftermath of this preliminary deal. Democracy in Sudan ultimately depends on it.

About
Allyson Berri
:
Allyson Berri is a Diplomatic Courier Correspondent whose writing focuses on global affairs and economics.
The views presented in this article are the author’s own and do not necessarily represent the views of any other organization.
keep reading
More on
Politics
//
View all
Breaking News
Channel |