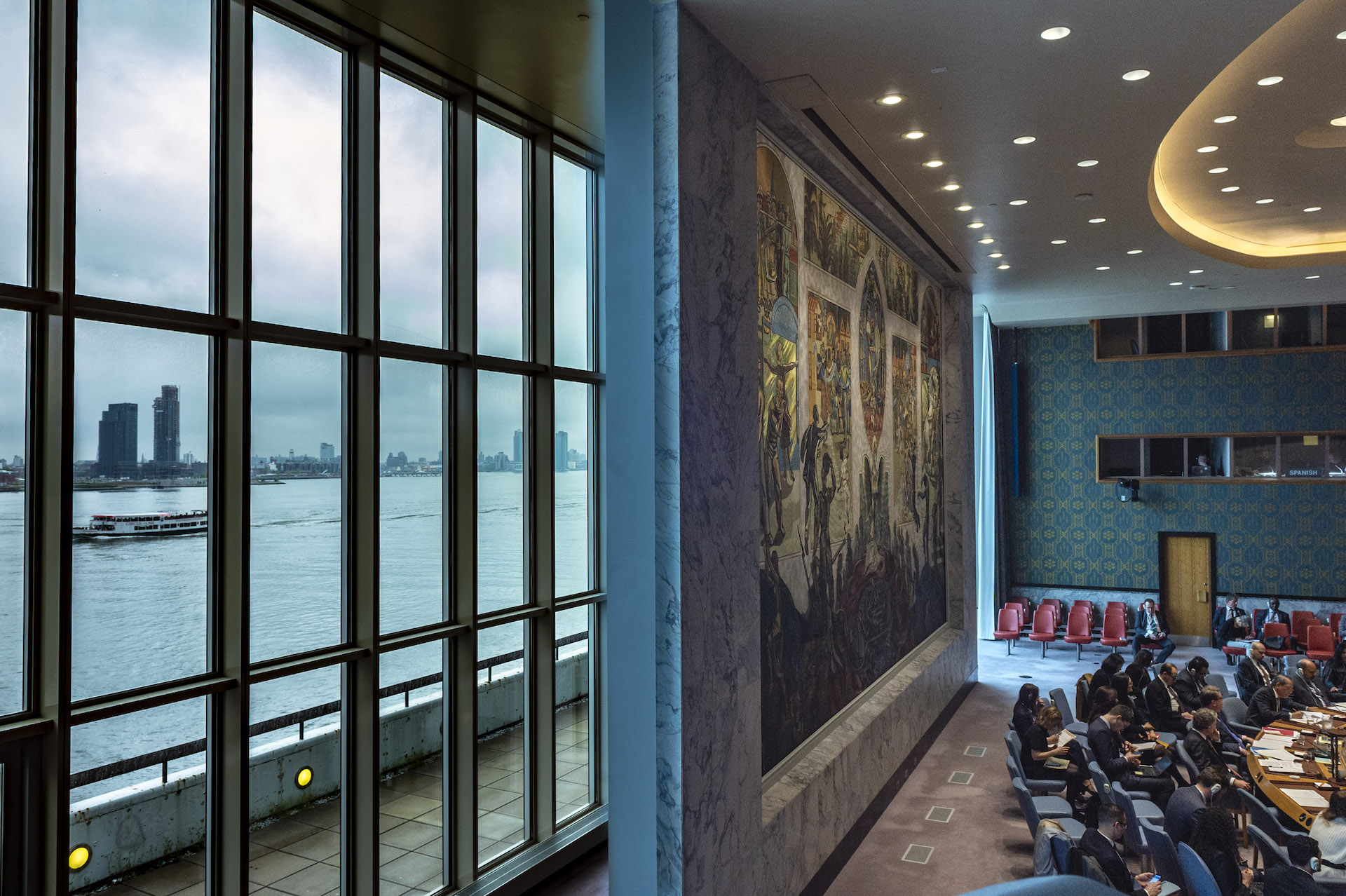 A view of the East River during a UN Security Council meeting in New York. UN photo by Loey Felipe.

ast Thursday, Sudan’s National Defense Minister Ahmed Awad Ibn Auf said that Omar al-Bashir, who had ruled Sudan since rising to power in an Islamic coup in 1989, had stepped down and was under house arrest. The military would attempt to retain control, it became clear, through the "transitional" military council.

Since then, coverage has often said that his ouster marked the end of long-term Arab dictators or has theorized that it may mark the beginning of another Arab "spring." Algeria has its own protests, after all. And Egypt fears that one is about to break out. The outlet UPI claimed that al-Bashir's end may be a bad portent for Bashar al-Assad in Syria. However, if it does represent the end of long-term dictatorships it is also a period characterized by military rule. And whether or not the ouster of al-Bashir represents the beginning of an African, or even an Arab "spring" 2.0, is—to put it mildly—arguable. The emphasis, in other words, would have to be on the word "may." Indeed, the question of the moment is whether it will represent a total democratic victory in Sudan.

Is this likely to be successful democratization? Really, al-Bashir's removal is not necessarily a sign of democratization to come, even though democratic protestors have been credited with causing the downfall. For instance, since the ouster of al-Bashir, and Defense Minister Ahmed Awad Ibn Auf, the military has yet to transition power to a civilian-led government, despite the exquisite courage and consistency of the protestors. In the meantime, the Sudanese people are being as repressed as ever: the constitution has been dissolved and the government has been disbanded in favor of a period of military rule which, we're assured, will eventually end. Whatever the promises of the current de facto leader Lieutenant General Abdel Fattah Abdelrahman Burhen to "uproot the regime" and revoke curfews and clamps on free press and to release political prisoners and the rest, the reality has been, so far at least, merely a hysterical attempt at re-entrenching the military junta. In other words, the new leader is the same as the old.

There is a subtle perversion of justice here, too. First, it would have been better, international standards of justice being as lackluster as they often are, were al-Bashir to face down in international court the laundry list of crimes that we're now reminded he and his thugs committed. There was the repression of Christians and "animists" which "ended" with the creation of South Sudan which could probably be described as a permanently failing state; kept in that state of permanent near collapse in part, I might add, by subsequent tensions with the north. There was also the mass slaughter and rape of Muslims in Darfur by the Janjaweed militia and the Sudanese military (the one still in power). There was also the land-thieving that followed that genocide as well as what prosecutors at the International Criminal Court would later label "systematic acts of pillage." Not to mention that Amnesty International has also accused the al-Bashir regime of having used chemical weapons.

Still, this is a fascinating moment for Sudan. It was partly the fear of intervention that led Sudan, under al-Bashir, to reign in its subjugation of the South Sudanese rebels which led to the signing of the CPA in 2005 and the recognition of South Sudan by the United Nations in 2011. At that point, al-Bashir had been forced to choose between persecuting the Christian South and risking it all or just persecuting the Muslim North. For reasons I have written about before, he chose to slaughter other Muslims. In that case, although he wasn't thrown from power he was limited in his power. Something similar could happen here, though one hopes for the total transition to a civilian-led government. All of that is to say that concessions could be wrung out if we're serious enough, and maybe not just for Sudan: repressive regimes all over Africa and the Middle East are leery and weary from popular protests.

On the international point, quickly. Historically, Sudan has kept up ties with sheikdoms like Qatar, to the fret of powers like Saudi Arabia and the UAE. This could conceivably change things. Egypt, Saudi Arabia, and the United Arab Emirates were (reportedly) prepared to back the military junta against the democratic protestors. Presumably, they would do so in the hopes of strategic gains. For example, that Sudan stops letting Turkey use Suakin Island to maintain a military presence in the Red Sea, as well as continued participation in the atrocities in Yemen, which Sudan has been an active participant in. For the moment, though, it is unclear. Either way, this will have some international consequences.

As for the western response: The vague western calls for a democratic transition or for sanctions would need (a) to be prepared for pushback from any or all of the interested states, and (b) to contend with the fact that it may harm the protestors at least as much as the military junta, which fears nothing so much as losing its vice-grip on power. If the west is to learn from its previous escapades in the region, it should be either all in or, more likely, all out.

Reveling in the pointed details of the downfall of a gruesome dictator can sometimes strike a strange chord, as if one were basking, voyeuristically, in violence. But in actuality, it is not revelry so much as a jittery nervousness. Probably, the payoff of this expense of nervous energy is to vent the pent-up angst of the atrocities committed by the dictator in question. In a sense, as the motto for the state I'm writing this in says, sic semper tyrannis. To single out al-Bashir is not to scapegoat, exactly. Rather, it is to pathetically let the military junta off the hook, which is precisely what the forces of reaction are banking on, throwing the blame entirely on one already drowning rat for the sake of a whole pack.

About
Daniel Mollenkamp
:
The views presented in this article are the author’s own and do not necessarily represent the views of any other organization.
keep reading
More on
Human Rights
//
View all
Breaking News
Channel |
Diplomatica

A Local Model to Help with Greece’s Refugee Crisis