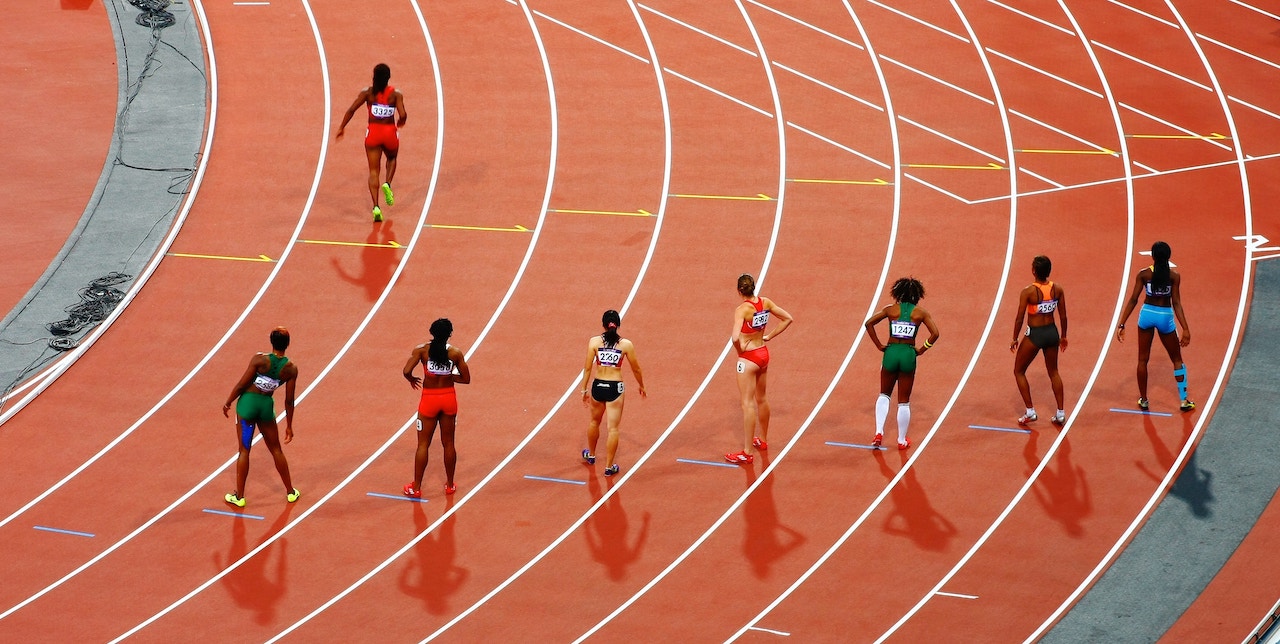 Wherever female athletes compete, whether that be a stadium, tennis court, track, or ice-skating rink, it seems that sports are just another arena where women are held to standards based on femininity rather than professional finesse.

he was an electrifying performer, lighting up the ice with dramatic twists and turns. Her athleticism was unrivaled, the earmark of her gymnastics background. Crowds went wild for French figure skater Surya Bonaly, making so much noise and clapping so loudly she compared the resulting noise to an earthquake.

And yet, the judges didn’t feel the same way. As a 2016 episode of the Radiolab podcast reports, judges consistently overlooked Bonaly’s athletic ability and dished her low artistic marks.

Disgraced American figure skater Tonya Harding received similar treatment. Harding could bench press over her body weight and was viewed as “less refined” than rival American skater Nancy Kerrigan, even after she became the first woman to land the difficult triple-axel jump in an international competition. As the New York Times reports, many of the judges that evaluated Harding’s skating wanted “gliding princesses, not grunting athletes like Tonya.”

Radiolab identifies a tension in figure skating between athleticism and artistry to explain Bonaly’s consistent second-place performance on the international stage. But other sports suffer the same symptoms without the matching formal diagnosis. Competing in the 2018 French Open, the president of the French tennis federation said that outfits such as American player Serena Williams’ full-body compression suit—donned due to life-threatening blood clots she had experienced in the wake of a difficult pregnancy—were disrespectful to the game. And during the 2018 U.S. Open, French player Alize Cornet found herself earning a penalty for simply switching her shirt on the sidelines between sets—a penalty not typically distributed to male athletes in the sport.

And criticism lodged at female athletes extends to vilify their behavior. In June 2019, the U.S. Women’s soccer team received a myriad of criticism surrounding their raucous celebrations during a World Cup match in which they beat Thailand’s team 13-0. U.S. Coach Jill Ellis has commented that the same questions of sportsmanship would have never been lodged against a men’s soccer team. And in Serena Williams’ performance in the September 2018 U.S. Open, just months following her catsuit catastrophe, the 23-time Grand Slam title champion received both a point penalty for smashing her racket and a game penalty for yelling at the umpire, actions male tennis players are rarely penalized for.

The New York Times notes that at the same time of Williams’ 2018 U.S. Open disgrace, a documentary underscoring the “genius” of American tennis player John McEnroe’s tennis-court tantrums was playing all over the country. Meanwhile, coverage of the 2018 U.S. Open described Williams’ behavior as an “outburst” and a “furious rant.” Criticism over her emotional reaction to what she perceived as sexist treatment by the judges at the U.S. Open is part of a larger story about gender roles in women’s sports.

Professor Vikki Krane notes that society holds women to standards of hegemonic femininity that require women to be passive and gentle. By the same token, hegemonic masculinity ensures that characteristics such as aggression, anger, or strength are reserved for men. Sports, which praise those who are aggressive, competitive, and strong, are thus inherently coded masculine, making women’s sports inherently disruptive. Female athletes that display “masculine” behavior while playing their sports—muscular figure skaters, raucous and boastful soccer players—go the extra mile in challenging restrictive gender roles.

Perhaps the best example of an athlete that challenge hegemonic femininity can be found in South African middle-distance runner Caster Semenya. Semenya has a condition known as hyperandrogenism. Her body has naturally elevated testosterone levels. The Court of Arbitration for Sport in Lausanne, Switzerland has ruled that this gives athletes like Semenya an unfair advantage over other female competitors in middle-distance races.

Evidence as to whether or not Semenya’s testosterone levels give her a distinct advantage is mixed. Dr. Aaron Baggish of Massachusetts General Hospital argues that “androgenized bodies” have specific advantages. Bioethicist Silvia Camporesi (with co-authors Simon Franklin and Johnathan Ospina Betancurt) has argued that there hasn’t been enough evidence to show that high testosterone specifically gives women and advantage in middle distance races.

However, whether Semenya has a large advantage in track and field isn’t the point. As Vox notes, questions over Semenya’s sex are not just about standards of fairness. Rather, the controversy over Semenya’s athletic performance is the best example of what happens when female athletes refuse to conform to “other people’s ideas about womanhood.”

Indeed, since her 2009 world championship victory, Semenya’s body has been under constant scrutiny and criticism. She has been subject to intrusive gender verification tests and a years-long legal battle with track and field’s governing body, the International Association of Athletics Federations (IAAF). Semenya, whose birth certificate identifies her as female, has described the public speculation about her sex as “the most profound and humiliating experience of my life.”

Speaking at a 2018 Olympic Foundation panel on Women in Sport, Phymzile Mlambo-Ngcuka, South African politician and Executive Director of UN Women, stated that though “there isn’t a country in the world that has attained gender equality,” through sports “you can outperform society.”

But are female athletes really “outperforming society” in an age where their celebrations of soccer goals are still considered unsportsmanlike? Where outfits tennis players wear for medical reasons are deemed “disrespectful to the game?” Wherever female athletes compete, whether that be a stadium, tennis court, track, or ice-skating rink, it seems that sports are just another arena where women are held to standards based on femininity rather than professional finesse.

Last Sunday, the U.S. Women’s National Team (USWNT) took the FIFA World Cup for the second year in a row. When scoring the first World Cup point for the American team in their match against the Netherlands, co-captain Megan Rapinoe looked confidently into the crowd, arms spread wide, a smug smirk on her face. She stood proud against weeks of criticism targeting the American team’s performance against Thailand, against British headlines that referred to her and fellow captain Alex Morgan as “too arrogant.” Rapinoe is just one of several battling against expectations of hegemonic femininity in women’s sports. But with every post-goal pose the American athlete strikes, she chips away a little bit more at the antiquated definition of what it means to be a female athlete. If the recent USWNT victory is any indicator, future female athletes will continue to challenge these restrictive gender roles—hopefully, until celebration over a soccer goal is no longer controversial.

About
Allyson Berri
:
Allyson Berri is a Diplomatic Courier Correspontent whose writing focuses on global affairs and economics.
The views presented in this article are the author’s own and do not necessarily represent the views of any other organization.
keep reading
More on
//
View all
Breaking News
Channel |