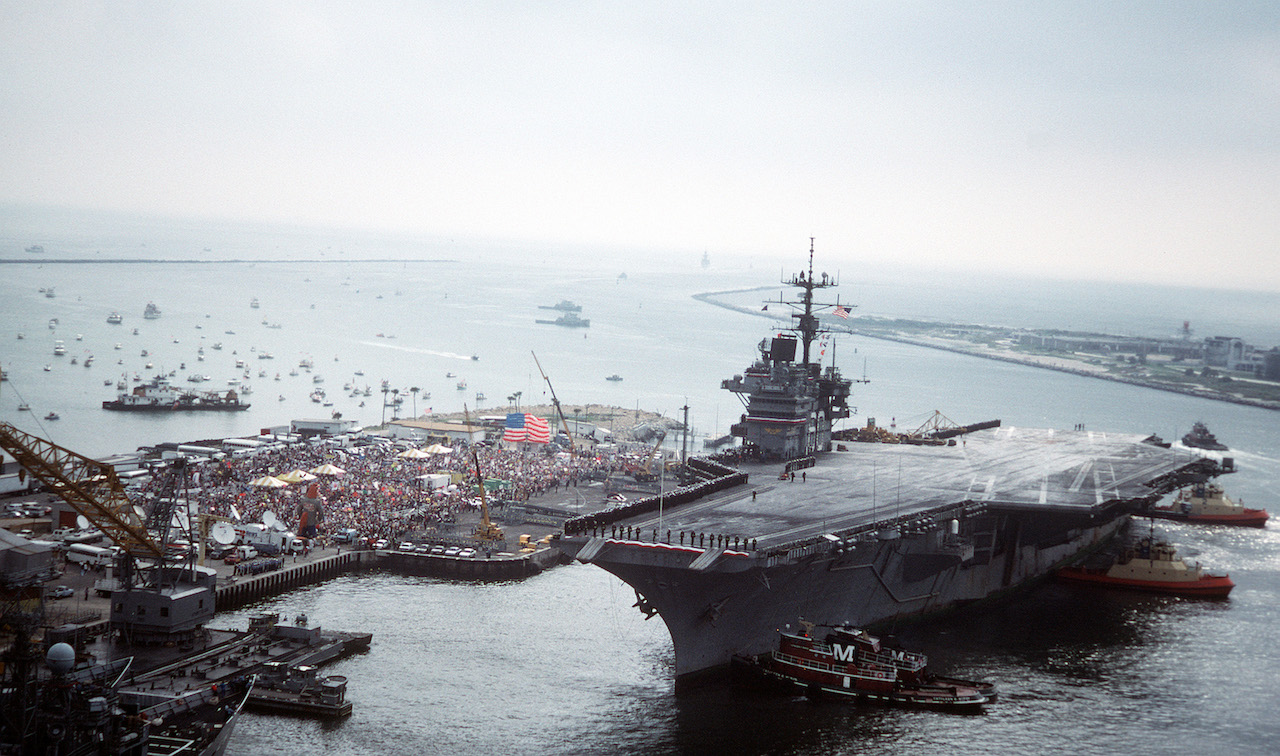 28 March 1991: Hundreds of people wait on the shore as the aircraft carrier USS SARATOGA (CV-60) is moved into place alongside the pier. The SARATOGA and its battle group are returning to Mayport following their deployment to the Persian Gulf region for Operation Desert Shield and Operation Desert Storm. Photo by Margo Frazier/Wikimedia Commons.

he effort united countries from every continent. Traditionally neutral Sweden found itself on the same side as Warsaw Pact powers including Czechoslovakia, Hungary, and Poland. NATO countries such as Britain and France joined forces with military units from Egypt and Syria.  Japan and Germany helped fund the fight. The Soviet Union and China allowed U.N. action against Iraq.  Altogether, 39 countries joined the coalition that made up Operation DESERT STORM, an impressive number in the tenuous post-Cold War climate.

The tensions that led to the international military effort in Operation DESERT STORM began with the 1990 Iraqi invasion of Kuwait. Looking to pay off its debts for an eight-year war with Iran, Saddam Hussein’s Iraqi forces officially annexed Kuwait in August 1990. The American response was swift. The U.S. was working to pass UN resolutions within a month of the Iraqi invasion. By August 25, 1990, just 17 days after the official annexation, the UN approved the use of military force in Kuwait if Iraq didn’t end its occupation by January 15, 1991.

Iraq had expected dissent from the United States when it invaded Kuwait, but it never expected the response from the international community orchestrated by American President George H.W. Bush. To prompt international engagement, Bush employed a sort of “telephone diplomacy,” using the connections he had formed as a former U.S. vice president and UN ambassador to reach out to leaders abroad over the phone. When Operation Desert Storm officially began in January 1991, the U.S. had 38 other countries on its side.

Ultimately, reviews of Operation Desert Storm were mixed. For the U.S. and its allies, the operation was successful. After all, Kuwait was liberated by the end of February 1991 and Iraq agreed to the terms of a ceasefire agreement by April. The coalition, however, was unable to fully punish Saddam Hussein for his behavior in the gulf, and in the years following Operation Desert Storm, he both attempted to assassinate President George H.W. Bush and planned to re-invade Kuwait.

However, despite the coalition’s inability to restrain Saddam Hussein, Operation Desert Storm remains a glowing example of what can be achieved when the international community bands together to achieve a common goal. Such international teamwork was recently lauded during a panel discussion at Washington, DC’s National Press Club, “Desert Storm: Intersecting With Today’s Middle East and a Report to America—The Building of a Memorial.”

The panel, composed of Marlin Fitzwater, former White House Press Secretary under President George H.W. Bush, Lieutenant General David Deptula, principal attack planner for Operation Desert Storm’s air campaign, Edward W. Gnehm, Jr., former U.S. Ambassador to Kuwait, and Joe Davis, national spokesman for Veterans of Foreign Wars of the U.S., reflected on the success of Operation Desert Storm and the need to honor its veterans in a monument adjacent to Washington’s National Mall. In opening remarks, Scott Stump, Desert Storm veteran and president of The National Desert Storm War Memorial Association specifically noted the international effort that restored sovereignty to Kuwait when he talked about his organization’s plan to build a monument commemorating Operation Desert Storm. After all, as The National Desert Storm Warm Memorial Association noted in its June 2019 project report, the international coalition that banded together to liberate Kuwait did so bravely under “constant threat of biological warfare.” The monument is set to be completed by 2021, honoring Desert Storm veterans in time for the operation’s 30th anniversary. Hopefully, the international effort behind Desert Storm will be on the minds of future visitors to the monument.

About
Allyson Berri
:
Allyson Berri is a Diplomatic Courier Correspontent whose writing focuses on global affairs and economics.
The views presented in this article are the author’s own and do not necessarily represent the views of any other organization.
keep reading
More on
//
View all
Breaking News
Channel |