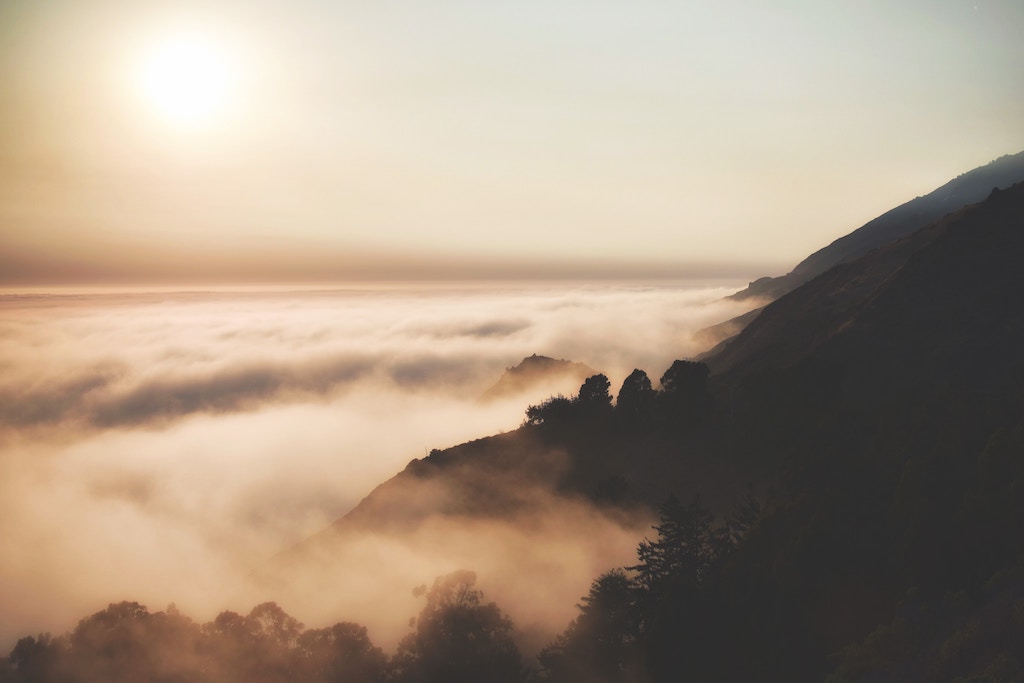 It seems that our understanding of the future is more unsettling than ever. The changes we see around us are both completely understandable and totally baffling.

t seems that our understanding of the future is more unsettling than ever. The changes we see around us are both completely understandable and totally baffling. I find myself meandering between hope and despair, between belief and disbelief, in ever increasing amplitude. ‘‘Spaceship earth,” as Buckminster Fuller called it, is a closed system wherein all the resources we need are found, and limited. Like being in a spaceship, we must be conscious of which, and how many resources are used; as their existence and ability to regenerate will determine if we survive or thrive. This is the only planet we have, and it must be able to nurture all living beings, great and small. Today, the natural ecosystems of our planet are degrading at an increasing rate. At the same time, the human condition has never been better.

So, why my meandering path? Because, the changes we have witnessed during our geologically minusculely short lifetimes will pale in comparison to those which lie before us. Because, the interaction of these two systems is complex, complicated and on a collision course. Because, we still have the opportunity to write our story of tomorrow which is also an opportunity to change, influence, and drive it towards a future we will be proud of.

Arup has aligned its business with the United Nations Sustainable Development Goals (SDGs); not just a few, but all 17. A multi-year engagement process was undertaken to develop a deeper understanding of what they mean in practice for disciplines, businesses, and different regions. Part of this process was the development of a set of four plausible scenarios, or stories, for the future. It is now recognized that human systems are putting our planetary systems under significant stress. Thus, we thought it appropriate to consider four worlds in which these two systems would be juxtaposed as the axes.

Each of the scenarios are compelling for different reasons: from a world where both the societal and natural systems move towards collapse, to one where symbiosis is the baseline for all activities on our planet. We believe that these four worlds are consistent, coherent, and plausible.

Both people and planet are on the path to a regenerative world. Society consumes resources at a rate that can be replenished, populations are diverse, and societal structures are balanced.

Science Based Targets (SBTs) for resource use and emissions are well established and are key to today’s recovering planet. The 2020s saw technology companies hotly contending for the position of ‘green leader’ driven by competing aspirations in ‘green tech’ and philanthropy.

Humanity is well on its way towards a shared consciousness and understanding of Earth’s limited resources, realizing that production and consumption are intrinsically linked to the natural environment. There is no ‘away’ to throw discarded things. Global ecosystem services are recognized and valued, helping to improve the quality of both planet and people. Circular processing procedures are adopted and implemented by most nations. Full life-cycle and ecological resource assessments are mandatory for all new products. Global biodiversity loss has halted, and protected areas are seeing ecosystem recovery. Every person has, and knows, their carbon quota and daily spend; AI provides personalized daily updates and state governments penalize overspend. The multi-stakeholder vision for an equitable and thriving future has prevailed. All global leaders are proud to wear the ‘thriving planet = thriving people’ symbol, showing their support for the drive towards the post-Anthropocene epoch. Cities around the world have transitioned from being in conflict with nature to something approaching symbiosis.

Climate action and biodiversity recuperation are the top line of every national and transnational agenda. The result of the galvanized global efforts has been unprecedented for the environment, but not without significant sacrifice from people who are realizing the trade-offs did not quite work out for them. Humanity now lives in self-imposed servitude to the environment under the mantra of ‘happy planet, happy people.’

For most of the last two decades, the Earth and its health have enjoyed the highest priority in the public consciousness. The scale and speed of environmental degradation of the first quarter of the century, with extreme weather events, rising urban air pollution and climate migration, drove governments and major global cities to act swiftly, and strictly, on climate action. Protected lands expanded worldwide and resources were allocated to restoring ecosystems. The extinction curve is flat and many species are now regenerating. The effects of climate change can still be felt, yet the impacts are less severe than predicted.

Environmental prioritization was an achievement of the SBT initiative and the ecological global framework adopted at COP32 as targets were integrated into all aspects of legislative decision making. Many countries appointed powerful scientific advisory boards that directly influence national legislation adopting strict regulation and large-scale punitive measures for those that continued business-as-usual operations.

Diets are barely recognizable from what they were 30 years ago. The prices for carbon-intensive foods, such as coffee and meat, have increased 500% compared to 2020 levels, with strict allowances in place for every citizen. Extreme urban densification, driven by urban growth boundaries for land-use regeneration, led to a premium on space. As a result, many low-income individuals are living in small, yet sustainable, apartments—an average of 8m2 per person. Pervasive carbon taxation and individual carbon allowances have severely slowed consumerism for the aspiring global middle-class. To save on their carbon allowance, people regularly repurpose used items and upcycling is at an all-time high, with a thriving ’Do Everything Yourself (DEY)’ culture.

Climate change and the relentless consumption of Earth’s resources has resulted in the destabilization of natural systems. Resource, energy, water, and food shortages are pervasive across the world. There is a stark division between the have-lots and the have-nots. Goods are easily accessible, but only to the wealthy few. The global middle class is almost non-existent. Information and knowledge exchange across borders is shaped by protectionism, and five independent internets have developed.

Environmental consciousness is non-existent. The Amazon rainforest, once one of the world’s largest carbon sinks, is almost entirely cleared. Resource colonies on the moon and in the deep sea have been established as demand for natural resources is a massive incentive to reach and operate in these inaccessible and inhospitable locations.

Natural resources that were previously taken for granted and considered basic human rights—such as water, air, ozone, land, and the oceans—are now genuine commodities. Water is highly regulated with restricted access; corporations now hold the monopoly on the majority of the global water supply. Those who can’t afford the cost of water must rely on erratic, usually contaminated, water sources. Similarly, clean air is accessible only to those who can afford it. Large-scale air domes have been erected over many of the world’s most prominent cities, to create safe havens for some segments of the population. Those people restricted from accessing air domes experience increased rates of asthma and lung cancer, that go largely untreated. Agricultural systems have suffered extensively from the transformed climate and irregularity of the new extreme weather patterns. Geo-engineering and GMO crop development are the only way to feed the global population.

Most nations have adopted nationalist agendas. They only look outwards to bilateral agreements for the exchange of natural resources and food. Mass climate migration and resource wars are now common occurrences. Governments are widely criticized by their constituents, accused of willfully shirking their responsibilities towards ecosystem health. Society is driven by a fear of the ‘foreign’ and ‘different.’ This has been exacerbated by an unheralded number of climate refugees and there is a continual challenge to the ever-increasing global authoritarianism.

For most people, life is as good as it’s ever been. Major advances have occurred in the former developing world where life expectancy has increased and infant mortality has decreased. Many nations have seen a renaissance of social state principles, with new welfare economies continually developing around the globe. Governments have provided new or upgraded housing, social services and Universal Basic Income (UBI) for those in need. Philanthropy has become mainstream. The increase in global societal conditions has come at the cost of environmental degradation due to a focus on improving living conditions, access to education, jobs, and resources.

In many ways, this reflects a business-as-usual trajectory from 2020: the condition of humanity has continued to improve at the expense of the environment. Climate considerations are subordinate to economic development and societal wellbeing. When coordinated action continued to falter on a global level, some settled for adaptation programs. Future-proofing their own critical infrastructure while protecting their populations is a priority.

A sense of urgency for climate action is palpable, but “Why should we go first?” or “Not in My Backyard” dominates the dialogue. Thus, most national governments hesitate or delay the needed large-scale actions.

The amplitude and frequency of extreme weather events increased throughout the 2020s and 30s, with wetter wets and drier dries, hotter hots and colder colds. Major cities across the world repeatedly experienced flooding of their subway systems, and are now finding ways to relocate their subway services above ground to ensure service. Persistent deforestation has contributed to shifting weather patterns causing severe, prolonged droughts, regional water shortages, and unrest. Water scarcity is on the global agenda, with many cities having run out of potable water; now turning to ocean-based desalinization facilities and large-scale infrastructure systems to counteract water shortages. In attempting to preserve humanities lifestyle, we have turned nature into an adversary who is now striking climactic blows that coastlines cannot defend.

Sometimes we must push ourselves to think outside of our daily lives, and envision the world as it could be, should be, might be, what we hope it will be and what we hope it won’t be. Although future pathways are not crystal clear, we can, and must, move forward with both aspiration and intent. These scenarios are intended to help us all consider how we craft the parameters of that intent.

We hope these four scenarios inspire you to consider how you can be the best ancestor that you can be, for all of humanity both for today and the generations to come.

The full version of the 2050 scenarios can be found at www.arup.com/2050scenarios.
About
Chris Luebkeman
:
Dr. Chris Luebkeman is Arup Fellow and Advisor to the President and Executive Board at ETH Zurich.
About
Jonelle Simunich
:
Jonelle Simunich is Senior Strategist at Global Foresight, Research and Innovation at Arup.
The views presented in this article are the author’s own and do not necessarily represent the views of any other organization.
keep reading
More on
Cities
//
View all
Breaking News
Channel |
Diplomatica

Cities and Nations: A Mutual Dependency