You Can’t Sell Sentiment in Washington 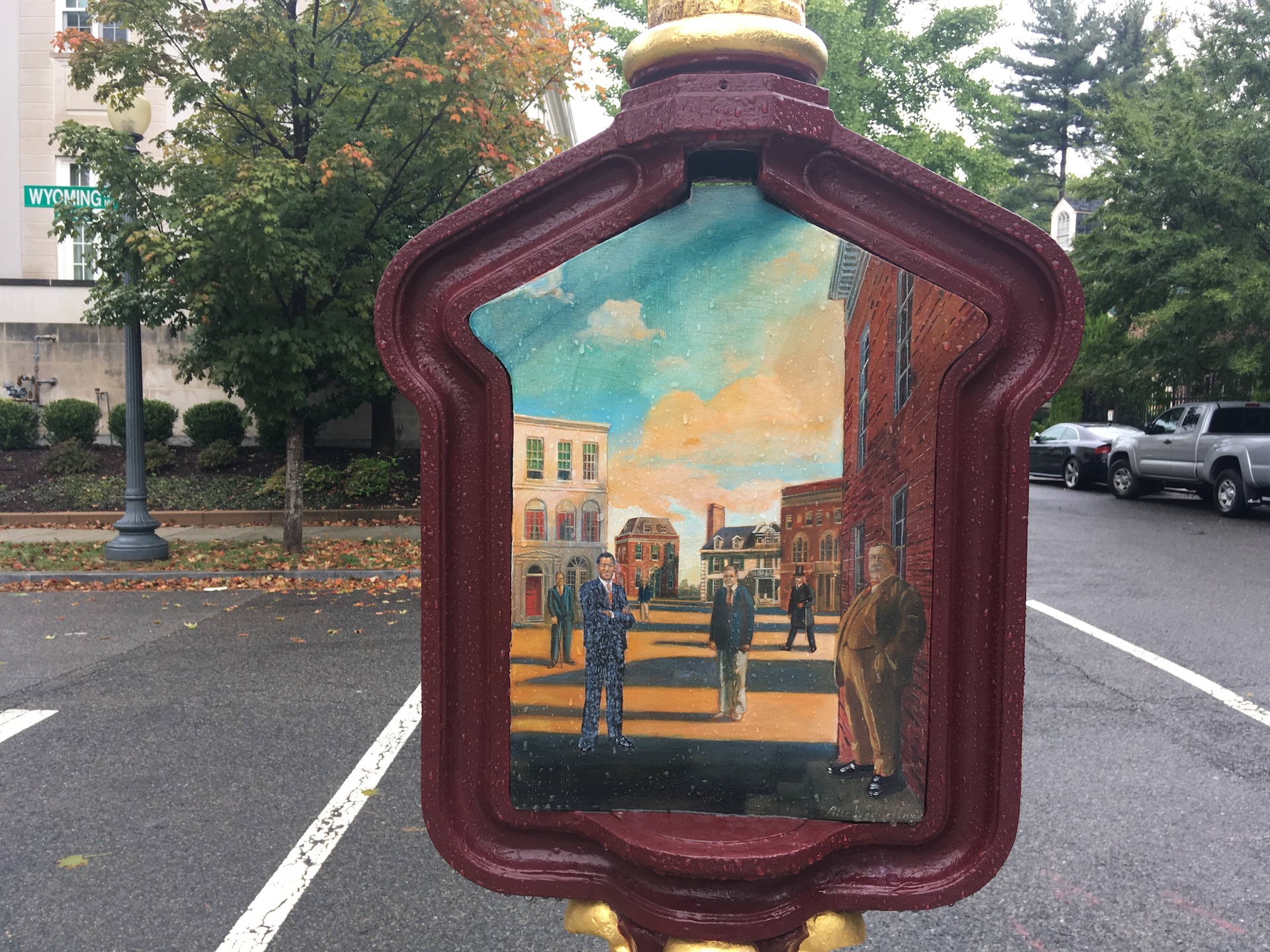 “I believe I should like to live a life of contented love, with you, in preference to all else.” -Warren G. Harding to Carrie Fulton Philips

Everything Old is New Again

In the gentleman’s study in the house at 2314 Wyoming NW in Washington, D.C., cigar smoke once hung so thick in the air that it was nearly one hundred years before it could all be cleared away. It was in this study that a newspaper publisher turned senator wrote steamy love letters to his mistresses, plotted to pay off those mistresses with his friend and fixer, and drafted the speech that would become his inaugural address when he would be sworn in as president in March, 1921.

Now the residence of the Ambassador from Monaco, and redecorated personally by the current ambassador, Maguy Maccario Doyle, to be a suitable home for diplomatic entertaining, the house that once belonged to Warren G. Harding might have become just another home in Washington were it not for an extraordinary series of events that left their imprint, like the smoke that clung to the walls, for many years after.

Harding and his wife, Florence, moved to Washington when he was elected to the Senate in 1914. They first rented a modest home in Kalorama before buying the three-story home at 2314 Wyoming in 1917 with money Florence had inherited from her father. Over the next several years, the couple spared no expense decorating the home and filling it with lavish furnishings, before selling the home, and most of its belongings, when they moved to the White House in 1921.

A century later, Harding’s study is a mixture of the old and the new, easy enough to imagine the president and his cronies lounging there, inviting enough to imagine spending an afternoon on one of the mocha colored leather armchairs, pursuing the classic hardbound books adorning the shelves, or plotting diplomatic pursuits. There are two small dishes on the table, perfect for the odd candy, keys, or capturing the stray cigar ash, flicked carelessly from one century to the next.

Although now, of course, the books on the coffee table are about Monaco, a country which was drafting its first constitution about the same time Harding was running for, and losing, his campaign for Governor of Ohio. (Despite subsequent revisions, the Monegasque constitution remains the shortest constitution in the world.)

The U.S. and Monaco established full diplomatic relations in 2006, although the U.S. does not have an embassy in the small nation. Instead, the U.S. Ambassador to France is also accredited to Monaco, and the U.S. Consul General in Marseille handles most of the day-to-day diplomatic relations with Monaco.

In 2007, Prince Albert of Monaco officially opened the Kalorama home. The Prince, the son of Grace Kelly, was educated in the U.S. and spoke fondly of his time stateside. (That fondness extended to the prince also purchasing his mother’s childhood home in Philadelphia in 2016.)

On a recent tour of the house, my gaze was directed to a small access door to a crawl space above the third floor. There’s some speculation among staff that the area, never fully explored during the house’s many restorations, might contain additional Harding letters. My offer to discover the alcove’s secrets was politely, but promptly, declined.

The Man Who Didn't Want to be President

"I am not fit for this office and never should have been here," Harding once said. But he campaigned on a “return to normalcy” after the turbulent war years, and was a handsome man with a pleasing demeanor, fond of golf and cars, and had a populist message on the podium, and so he was elected.

A notorious land deal, subsequent payoffs and cover-ups and smear campaigns launched by the president’s allies against those deemed hostile, defined much of Harding’s short presidency. Although his affair with Philips did not continue once he entered the White House, he was not lacking for mistresses. When rumors of the sheer number of affairs began to bubble within the Washington press corps - (including one journalist who also was one of Harding’s mistresses), Harding told a stunned group of reporters at the National Press Club, "It's a good thing I am not a woman. I would always be pregnant. I can't say no."

The rumors were so rampant that dossiers were compiled of possible mistresses and enemies alike, private investigators were hired, and jobs were created in the administration to keep people from telling what they knew. Various women signed affidavits swearing they had no carnal knowledge of the president and when they wouldn’t sign willingly, Ned McLean, a friend of Harding’s, publisher of the Washington Post, and political fixer, was tasked with securing their compliance. (McLean, the gadabout husband of Evalyn Walsh McLean, who features in the Diplomatica issue, This is What Brings On Revolutions, was once called “more of a curse than the diamond.)

Moving Down, Moving Up

Following his election in 1920, a cheeky Washington Post article pondered what would become of the Hardings’ home in Kalorama when he took office on March 4, 1921. “One thing is dead certain,” the journalist wrote, “If he wants to rent the house he can get his own price, and have a long line waiting for the chance to take it. Aside from the historic interest that now clings to it, it is a very desirable home, in perfect repair, well within the fashionable center of the city, and splendidly adapted for entertaining.”

That the Hardings were already living in Washington solved one frequent presidential problem - when incoming presidents send their belongings to the White House in advance, “the outgoing President’s things and the incoming one’s have usually jostled each other on the presidential stairs.” Not so in Harding’s case, when “few passersby will know that the modest procession of trucks rumbling down Connecticut Avenue early on March 4th contain the new president’s dearest possessions, every one of which will become historic and liable to be handed down as precious heirlooms for generations to come.”

But those dearest possessions ultimately did not include much of the prized furnishings and other items in 2314, which the Hardings sold along with the house, and which, following a scandal a few years later, would fetch paltry sums at auction.

An Auction that Followed an Election, a Scandal, and a Suicide

When Harding moved to the White House, he sold 2314 to Charles F. Cramer, a friend who he would later appoint as chief counsel for the new Veterans Bureau, the precursor to today’s Department of Veterans Affairs, created to care for the health needs of soldiers returning from World War I. The man Harding would appoint as the first director, Charles Forbes, would go on to embezzle nearly $250 million from the agency through a series of shady land deals, overbilling contractors, and selling medical supplies meant for veterans at a discount to corporate interests. Although not from the president’s home state of Ohio, Forbes was known as part of the “Ohio Gang,” a team of high-ranking officials engaged in corruption at all levels of the Harding administration.

And Cramer? Caught up in the embezzlement scandal, Charles Cramer drafted a letter to the president on the same dining room table the then-senator and his wife had purchased for 2314, then went to the bathroom, and shot himself.

Following Cramer’s death, 2314 was sold to a realtor, Captain Ennalls Waggaman, who made it his home. On October 16, 1923, a red auctioneer’s flag hung outside the house and the furnishings that had once belonged to a president were placed on public display.

“From the prices bid on scores of articles, which, besides having intrinsic value, had the additional sentimental association of the President of the United States,” wrote the Washington Post the day after the auction, “it was more or less evident that the greater number of purchases were made for the opportunities they offered for getting a ‘bargain’.”

With bids repeatedly being driven down by lack of interest, the auctioneer shook his head at the nearly obscene prices—a four-piece mahogany, upholstered velour living room set consisting of a sofa, two armchairs and a side table sold for $45.00—and loudly and repeatedly proclaimed, “You can’t sell sentiment. Not in Washington.”

This issue of Diplomatica originally appeared in the Diplomatica newsletter in 2019. Follow Diplomatica on Twitter @DiplomaticaDC.
About
Molly McCluskey
:
Molly McCluskey is an international investigative journalist and Editor-at-Large of Diplomatic Courier. Follow her on Twitter @MollyEMcCluskey.
The views presented in this article are the author’s own and do not necessarily represent the views of any other organization.
keep reading
More on
Diplomacy
//
View all
Breaking News
Channel |