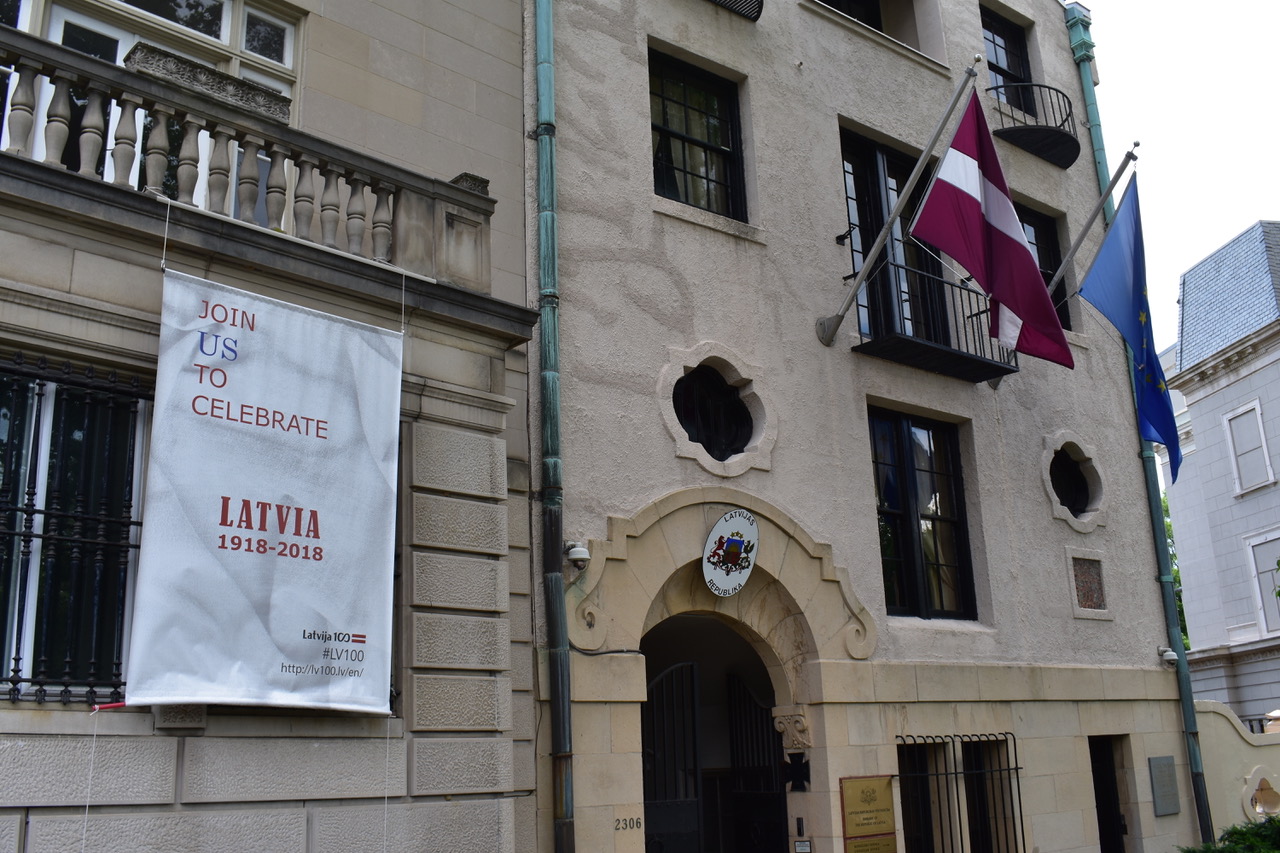 The exteriors of the two buildings that comprise the Embassy of Latvia on Sheridan Circle. Photo by Molly McCluskey.

Nearly a century before the building at 2306 Massachusetts Avenue NW became the Embassy of Latvia, it served as the place where culture and art exploded in Washington, dragged here nearly by force by a woman named Alice Pike Barney in 1903. Today, the building is the home of the Embassy of Latvia, and keeps many of the features that made the home the hub of social activity on Sheridan Circle at the turn of the last century.

"What is capital life after all? Small talk and lots to eat, an infinite series of teas and dinners,” Pike Barney famously posited. “Art? There is none.”

An American-born painter who had studied in Paris, Pike Barney had hosted several solo shows in galleries in Washington, including the Corcoran, and enjoyed courting the occasional scandal, such as when she installed a life-sized nude statue of her daughter, Natalie, on her front lawn, causing traffic around the circle to become more animated than usual. Natalie, who at the age of 24 began openly writing to love poems to other women (under her own name, nonetheless), once said scandal was the best way of getting rid of nuisances - i.e., the attentions of male suitors.

Pike Barney was instrumental in the building of the Sylvan Theater on the National Mall, providing not only funding but inspiration, connections, and occasionally, her own work for performance. After she retired to southern California in 1923, Pike Barney founded and directed Theater Mart, a playhouse focused on fledgling playwrights who otherwise would not have the opportunity to have their work staged.

Married at nineteen to a man who strenuously objected to her preference for artistic pursuits over a more domesticated life, Pike Barney spent much of her marriage living separately from her husband, who ultimately drank himself to death. In her mid-fifties, she then married a man thirty years her junior.

She was a prime example of the classification of the "New Woman" that emerged at the turn of the last century, a precursor to the suffragettes who would later forge a new path for women everywhere, and a scandal until the day she died.

A Home That Reflects Its History

“A perfect setting for old world dramas, for pageants of the New World, as well as for the daily round of luxurious living is the 'Studio House' belonging to Mrs. Alice Barney on Sheridan Circle at 2306 Massachusetts Ave,” The Washington Post wrote in 1927, at the height of the popularity of the Pike Barney House on what would later become Embassy Row.

Her home, known as the Studio House, is an architecturally eclectic one, built with a love of the arts, and artists, and a desire to showcase all they had to offer. A drawing room off a dining room has a raised section for lectures and readings. A reception room boasts a double height studio with a balcony and stage, onto which is carved, “The highest problem of art is to cause by appearance the illusion of higher reality.”

The building’s design also showcased Pike Barney’s love of European culture and architecture, with carved Spanish doors, balconies of the sort from which one might catch roses from adoring fans after a performance. The rooms have huge beamed ceilings and whimsically and occasionally mischievously carved columns, handmade tile floors and stained glass windows, peepholes and fireplaces. It’s completed by a garden filled with the kind of sculptures that might stop traffic, were they in the front yard, rather than the back.

A Home Becomes a Museum

In 1961 Pike Barney’s daughters, Natalie and Laura, by that time also renowned artists in their own right, donated the home, with its artwork and furnishings, to the Smithsonian. Fifteen years later, the home became part of the National Museum of American Art, now the Smithsonian American Art Museum. In April 1995 the Alice Pike Barney Studio House was placed on the National Registry of Historic Places.

A Museum Becomes an Embassy

The Smithsonian sold the Alice Pike Barney studio to the Latvian government in 1999, in what was a homecoming of sorts for the Baltic nation. During a visit to the embassy in late 2018, then- Latvian Ambassador Andris Teikmanis, said the adjoining townhouse, 2304 Massachusetts, had been the site of Latvia’s first consulate. However, during the Soviet occupation of Latvia from 1945-1991, the country’s legation lived in a much different environment.

Teikmanis pointed to the coat of arms hanging on the wall behind him, the Latvian coat of arms that hung in the all of the Latvian embassies since the first legation. He wasn't as focused on which building Latvia has owned during the past one hundred years, as he was about the longevity of the bilateral relations overall.

“The most important thing is that the Latvian flag has been always here in this city, since 1922.”

It is important, as the country has survived a series of three occupations, two by Soviets, and one by Nazi Germany, since 1940, the last one only ending in 1991. (Another Baltic nation, Estonia, has a similar history, and similarly interesting history with its embassy, which will be featured in an upcoming issue.) Latvia celebrated its centennial in 2018.

“During the occupation time, we had a very small building, on 16th or 17th Street, and I remember, I visited it during the early 90s, and it was very small indeed,” Teikmanis told me in his office at the embassy, where a historical photograph of the Alice Pike Barney house hangs over his desk. An inheritance with the building, he said. “Maybe for the occupation time, and the staff was quite tiny, it was sufficient, but no more.”

“It is a very particular building, with quite unique architecture, and the design indoors is quite unique, and we can be very happy. It is very convenient, also, for offices, and very good location, in the middle of Embassy Row.”

When the government purchased 2306, they were able to expand their operations into the property they already owned at 2304 Massachusetts Ave NW, to form a multi-level chancery, exhibition space, and accommodations for visiting artists. In a zoning board hearing for the approval of the chancery, the neighborhood commission insisted, given the building’s history as both an art salon and an art museum, that the embassy regularly host public art showings.

Whereas the visits by members of the public have ebbed and flowed over the years, dictated by circumstance, building ownership and natural causes, there is one guest of the embassy who is rumored to visit still, not concerning herself with things like sagging floors or locked doors - Alice Pike Barney herself.

Employees of the studio reported hearing the clacking of stilettos on the tile when no one was in the room, or catching a glimpse of a peacock feather, the sort that Pike Barney would often tuck into her hair, or hear the faintest hint of music playing from another room.

Pike Barney’s daughter, Natalie Clifford Barney, all but confirmed the haunting when she wrote:

Those who exist in the spirit are more easily with us

Than those obscured by the flesh,

For surely to haunt is more than to possess.

Which begged the question, does Pike Barney still roam about her old home?

“Previous residents of this building have reported seeing the ghost of Alice Pike Barney,” I told the Teikmanis.

“Oh really? I haven’t met.” Teikmanis said with a chuckle. “Yet.”

“Is there anything you would say to her if you did meet her?”

“Well, I would probably say to her, thank you for this beautiful building," he said. "We feel very comfortable here.”

An earlier version of this profile appeared in the Diplomatica newsletter.
About
Molly McCluskey
:
Molly McCluskey is an international investigative journalist and Editor-at-Large of Diplomatic Courier. Follow her on Twitter @MollyEMcCluskey.
The views presented in this article are the author’s own and do not necessarily represent the views of any other organization.
keep reading
More on
Diplomacy
//
View all
Breaking News
Channel |