This is What Brings On Revolutions 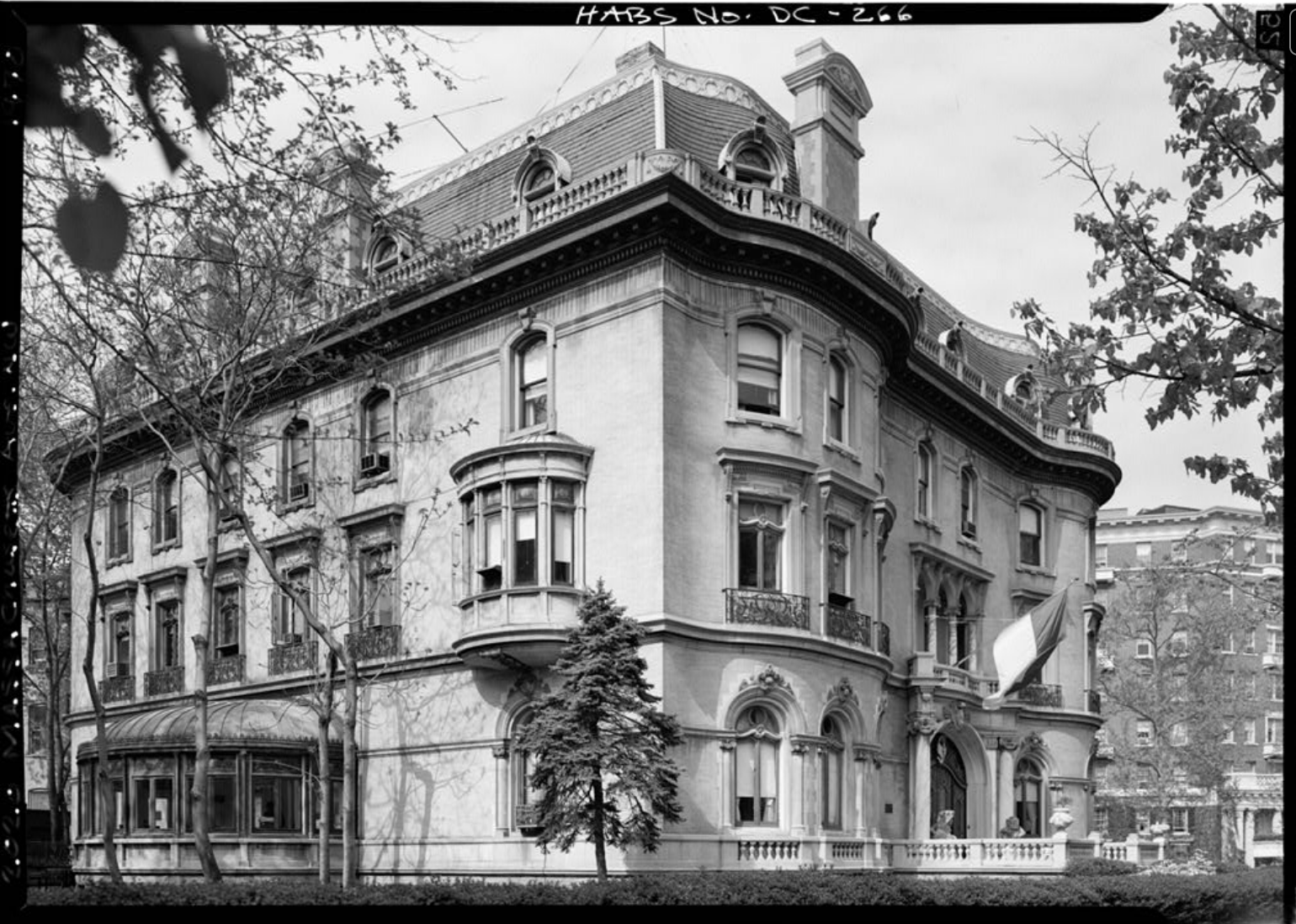 The Mansion at 2020, built by Thomas Walsh in 1901, is now the home of the Embassy of Indonesia. Photo courtesy of the Historic American Buildings Survey.

“I am sitting back on the sidelines letting the curse and the blessing fight it out together. Personally, I have so much faith in goodness and right working out in the end that it never worries me.” –Evalyn Walsh McLean

our enough old houses in Washington and you’ll find rumors of hauntings in nearly every one, and the stories of hauntings in embassies and diplomatic residences are as varied as the former inhabitants thought to be haunting them. The Latvian embassy is thought to be haunted by the ghost of its builder and original inhabitant, the artist Alice Pike Barney. The residence of the Ambassador of Monaco allegedly has a former president wandering around his old home. And with dozens of other grand estates still intact, albeit now the homes of foreign dignitaries, there’s more than a fair share of disenchanted ghosts wandering around.

But the story of the Embassy of Indonesia, and the ghost who resides there, can't quite be lumped into the same categories as all the others. After all, no other embassy has a tale that includes a Great Dane named Mike, FBI director J. Edgar Hoover, and a diamond.

An absolute doozy of a diamond.

Thomas Walsh was a newly rich, Irish immigrant who struck it rich gold mining in Colorado when he bought the land at 2020 Massachusetts Avenue in 1901. The home he would build there was a feat with 60 rooms, including a classic ballroom. A Louis XIV salon off the front entrance once held grand affairs, an adjoining room boasts a stunning, floor-to-ceiling Baroque wood organ, now in disrepair, and the ceiling features stained glass the color of Irish fields. A mahogany stairwell, modeled after one Walsh had admired on a German steamer, still graces the foyer of building’s ceremonial entrance. Walsh was rumored to have stored gold bars in the house, although like many pieces of the Walsh legend, that can’t quite be confirmed.

The home was nicknamed “The Million Dollar House” in local news reports, although the actual cost of building it came in just shy. Among friends, it was known simply as “2020,” a moniker still used today. The builders and the Walsh family also dubbed the home Mansion 2020.

The stables Walsh built nearby on 1511 22nd Street also remain, designated a historic place in 1986.

“It is a handsome and well-designed building by noted Washington architect Lemuel Norris, it is one of the few remaining unaltered stables in Washington, designed to service a lavish and elegant mansion, and as such is a reminder of the social and cultural era which no longer exists in Washington,” reads the petition to have the stable added to the National Register of Historic Places, “and it is associated with Thomas Walsh, the owner of one of the world’s largest gold mines who not only contributed to the social and cultural development of the Nation’s Capital, but also left an architectural legacy.”

Evalyn Walsh, Thomas’s only daughter, was by all accounts a young socialite who found creative ways to spend her inheritance. In a report about her marriage to The Washington Post heir Edward "Ned" McLean, she was described thusly: “She is an unusually handsome girl, vivacious, accomplished, and extremely popular.”

She wanted for nothing, was known to spend so much money on a single piece of jewelry that the price back then would buy a modest home in Washington D.C. today, even without adjusting for inflation. She fell for a con that sent her on a wild chase to recover the Lindberg baby. And, seemingly on a whim in 1911, Evalyn bought the most famous, and perhaps most cursed, diamond in the world.

Discovered in India in 1642, what is now known as the Hope Diamond began as a 115 carat gem that was cut to 69 carats by King Louis XIV of France - yes, he of the salon -  in 1673. It was stolen during the French revolution in 1792 and was thought lost forever until it reappeared in the collection of Henry Philip Hope in 1839. A series of sales brought on by the misfortunes of the families who owned the diamond added to a growing rumor that the diamond was cursed. After all, Tavenier, the man who had sold the diamond to King Louis, was torn apart and eaten by wild dogs. Louis and his wife, Marie Antoinette, who wore the diamond, were both beheaded during the French Revolution.

In 1908, Pierre Cartier showed Evalyn the diamond while on her honeymoon in Paris with McLean and regaled them both with its tales. Several months later, Cartier reset the diamond, “and left it on her dressing table for a weekend.” Evalyn was both fascinated and undeterred by the diamond’s legacy, telling a friend, "Objects unlucky for others are lucky for me."  Which was perhaps the best attitude with which to approach both the gem and her marriage, as Ned enjoyed a rather scandalous, and thoroughly earned, reputation, and was deemed “more of a curse even than the diamond,” by a local newspaper.

Whether to play into the legend or for more pragmatic purposes, the Cartier sales contract had a rather odd clause. "Should any fatality occur to the family of Edward B. McLean within six months, the said Hope Diamond is agreed to be exchanged for jewelry of equal value." McLean’s mother died shortly after the purchase, prompting Evalyn to have the diamond blessed in a church. During the consecration, the legend goes, “a huge tree across the street fell with a mighty crash as if struck by lightning.”

Evalyn was infamous for her rather cavalier treatment of the monstrous gem. Mike, her Great Dane, was often seen with the Hope around his neck. Evalyn’s daughter teethed on it. During parties, Evalyn would often hide it around the house so that others might enjoy the quest of finding it, or simply stumbling upon it. She pawned the diamond many times over the course of her ownership, using the funds to pay the caterers for parties so extravagant, one senator is said to have exclaimed, “This is what brings on revolutions.”

“At lavish parties, she often wore it together with the 94.8-carat Star of the East and the 31.26-carat McLean Diamond,” The Washington Post wrote in 1997. “She wore the Hope during delicate surgery, friend Alice Roosevelt Longworth said. She wore it to races, while swimming and on an Arctic fishing trip.”

Tragically, the McLeans’ 9-year-old son had the diamond in his pocket the day he was killed by a passing car. The child, Vinson, was named after Evalyn’s brother, who had been killed in 1905, also in an automobile accident. Years later, her daughter would die of a sleeping pill overdose. Evalyn herself was seriously injured in the earlier wreck that killed her brother, and was subsequently addicted to painkillers as a result. While breaking the habit, Evalyn took to walking the halls of 2020 with her nurses late at night. It’s this image of her, as a younger woman, pale and walking the floors of 2020 until the sun returned, that more modern residents have claimed to have seen.

2020 was many things in the years between Thomas Walsh’s building it and the Embassy of Indonesia buying it. After Evalyn’s parents died, she inherited the property, although lived for many years with her husband at their home, Friendship, in what is now the McLean Gardens complex off Wisconsin Avenue, one and a half neighborhoods away from what is now called Friendship Heights.

In 1937, Evalyn tried to turn 2020 into a hotel, but the Dupont Circle Citizens Association fought her plans. The house sat mostly empty, save for the occasional social function, until 1940, when, like many local manors during World War II, it was used for war efforts. McLean temporarily turned over the home to the American Red Cross and the Washington Committee of the American League for Finnish war orphans. The DC Red Cross used the home as their Roll Call office, offering training courses, and parenting refresher classes for grandmothers.

In 1941, 2020 became the home of the Washington Theatre School, and a workshop for the arts offered “registration for spare time art classes for government workers, business and professional people...” including the choice of 19 different “hobby” courses such as painting and sketching, short story writing, drama, modern dance for women, and others.

Evalyn died in 1947 wearing the Hope. Upon her death, J. Edgar Hoover took the diamond, and put it into an FBI safe.

Shortly after, one of her many obituaries read, “Until late in life, she did not have much idea of what to do with money save display it. She spent it fabulously and often foolishly.” The family sold the Hope to jeweler Harry Winston.

In 1951, after 2020 had sat vacant for several years and was badly in need of repair, Indonesia purchased the property for $335,000. Although the embassy is widely believed to be the most haunted embassy in D.C., which staff openly admit, Margaretta Puspita, the third secretary of the Embassy of The Republic of Indonesia told me after my recent tour, “We don’t like to talk about the ghost."

In 1958, Harry Winston donated the Hope to the Smithsonian, sending it via postal mail. In doing so, he secured Evalyn’s legacy as the last private owner of the most stunning, and some say, cursed, gem in the world.

But Evalyn herself, while she may have enjoyed the legend of the curse, didn’t seem to put too much stock in it. She wrote in her memoir, "I had it blessed myself and I am sitting back on the sidelines letting the curse and the blessing fight it out together. Personally, I have so much faith in goodness and right working out in the end that it never worries me."