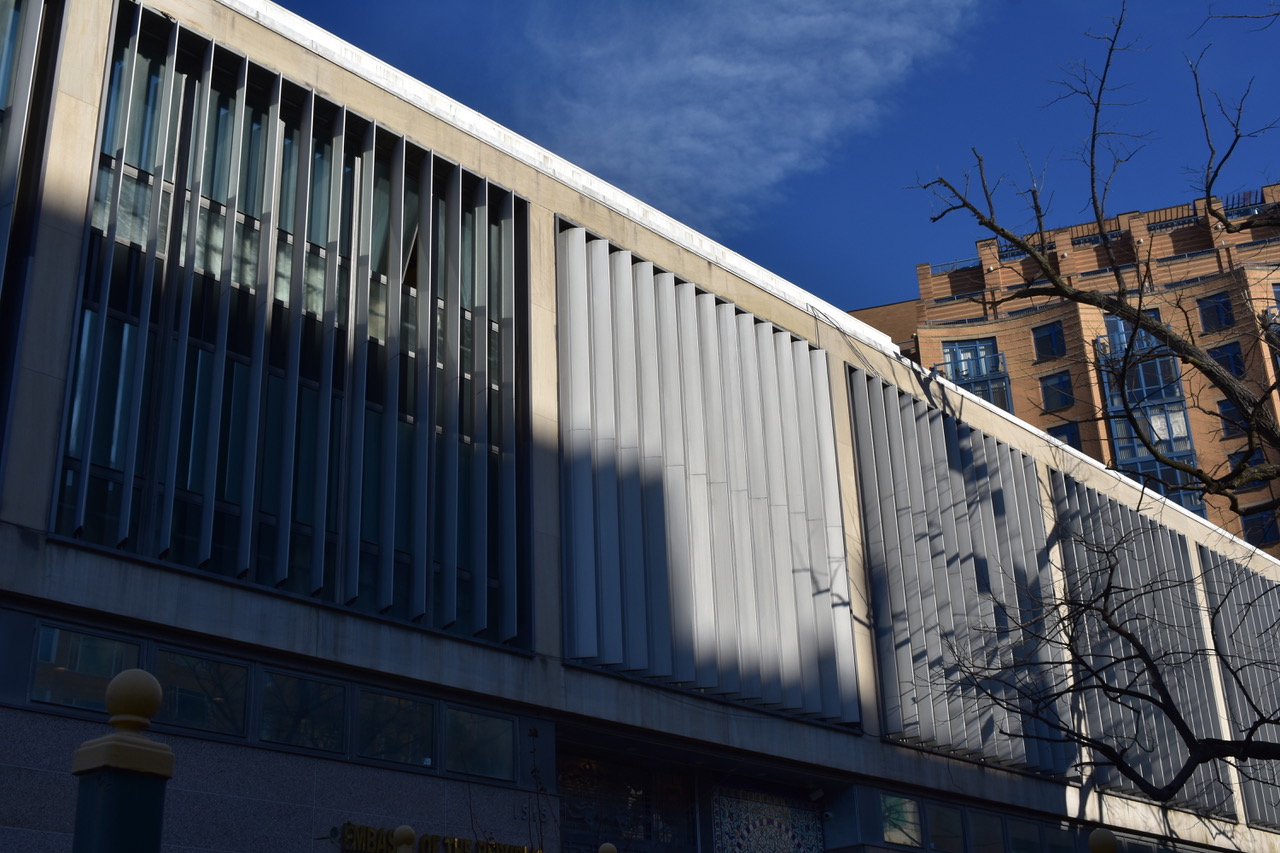 The Embassy of Tunisia boasts an unusual design feature. Photo by Molly McCluskey

The Embassy of Tunisia lives in a building that was once a science experiment.

ear the intersection of two of the most prominent and historic stretches of embassies in Washington, 16th St and Massachusetts Avenue, near Scott Circle, where a small maze of side streets wander around monuments, the Embassy of Tunisia lives on an island in a building that was once a science experiment.

But before it was the embassy of the northern African nation, the building at 1515 Massachusetts was the headquarters of a prestigious scientific association, the home of a former diplomat who featured in a previous issue of Diplomatica, the site of a spat of petty crimes, and the disappointment of Tunisia's president.

To walk by it casually, you might not know it's an embassy if you weren't looking for the telltale signs—the flagpole, the gate, the gold dedication plaque by the front door, invisible from the street. From the front, it's more apparent; Embassy of the Republic of Tunisia is written in gold lettering in both English and Arabic, and a stunning tile mosaic adorns the entryway. But the building itself lacks the air of turn of the prior century, gold rush money that its peers further up Massachusetts Avenue exude, and alone, on its island, it seems adrift, somehow. It's a rather odd-looking building, all boxy and concrete, with strange slats adorning the outside.

Because, unlike other countries whose embassies and residences occupy Beaux Arts mansions or floors in high-rise complexes downtown, the Embassy of Tunisia is in a building that was once a science experiment.

"There is something very particular about this building. You see these pavilions here outside, they used to work according to the sun moves, of course now, they don't work," Tunisian Ambassador Fayçal Gouia told me with a laugh when I met with him in the embassy last year. "I don’t like them. When you look at them from outside, you ask, what is that?"

It's a question that has been asked by passersby no doubt since the original building was proposed in 1952 by the American Association for the Advancement of Science, which envisioned turning the lot into their new headquarters. Prior to purchasing the property, 1515 Massachusetts was the site of a home, that belonged to US Navy Paymaster General George F. Cutter, who died in there in 1890. When the home belonged to Miss Minnie Rynes, it was the site of one of the largest recorded thefts of liberty bonds, valued at $1000. And in 1930, when one Miss Charlotte Dooley resided at 1515 Massachusetts, $50 in cash and a check for $155 was rather intriguingly stolen from beneath her pillow while she slept.

And most notably for readers of Diplomatica, in 1910, one former ambassador, Henry White, resided at 1515 before purchasing the property that would later become part of the Meridian Center on 16th Street NW.

AAAS's original building plans were denied by the zoning board, because the location for the proposed eight stories in a residentially zoned area was “not a proper place for a large office building.” Organizations were occasionally exempted from the zoning requirement if they met certain philanthropic requirements, which AAAS did not. About the same time, the NAACP and the Catholic Standard, the newspaper of the archdiocese of Washington, were denied building permits on similar grounds.

A revised, smaller plan was proposed and that was granted. But the redesigned building plan called for large windows on multiple sides of the structure, and with them, a new problem—too much daylight.

"By this time, we had discovered the vertical louvers, or movable sunshades, made of aluminum had been used successfully in the Far West to control the daylight in buildings, and we decided to look into these as a possibility," famed Washington, D.C. architect Waldron Faulkner, who designed the headquarters building, wrote in Science, in 1952, in an essay entitled "The Architect Reviews His Files."

"They turn during the day by means of an electric motor controlled by an electric clock mechanism, and take certain predetermined positions at definite times, depending on the hour of the day and time of the year," he wrote.

The goal of the louvers was ostensibly twofold—first, they reduced glare impacting workers at their desks. Second, they reduced heat absorbed by the windows, reducing the need for excessive cooling in the brutal Washington summers.

But, perhaps it is the third goal which is the most telling. As Faulkner wrote, "In addition to these practical advantages, the shades give a decidedly novel appearance to the building on which they're used." In 1960, the Chemical Society adopted similar louvres, albeit horizontal ones, to the ones at AAAS.

The AAAS headquarters building was completed in June, 1956. Just a few weeks earlier, on May 17, 1956, the United States became the first major power to recognize the sovereignty of Tunisia, newly independent from France.

Before moving to the location at 1515 Massachusetts Avenue, Tunisia had a perfectly fine embassy further up Massachusetts Avenue, in a more traditional stretch of Embassy Row. But when then-President Habib visited Washington, he thought that the existing space wasn't fitting for Tunisia's relationship with the United States. After all, the United States and Tunisia had bilateral relations dating back to 1797, when they signed an agreement of "Friendship, Commerce and Navigation." President Jefferson hosted the first iftar at the White House in 1805 with an envoy from the Beylik of Tunis, modern-day Tunisia.

"We used to have a much smaller embassy on Massachusetts Ave, and when the president visited, he was very very upset," Ambassador Gouia told me. "He said, what is this? We deserve better, as Tunisia. And he said, you sell this embassy and you buy a beautiful embassy on a hill, and I would like all Americans to see the Tunisian flag."

The Tunisian government bought the property in 1985.

"So, they were looking everywhere, and they didn’t find an embassy with these characteristics, so they bought this building. When he came to inaugurate it, he said 'I told you, I want the building to be on a hill."

"And they said, Mr. President, in Washington, there are no hills." Ambassador Gouia chuckled as he recounted the tale. "And this is not a hill, but you see, there are some stairs, and people can see the Tunisian flag. So, he said, OK. I’m not very convinced, but it’s OK."

A plaque by the front door of the embassy marks the inauguration of the building by President Bourguiba in 1985. Two years later, he was ousted in a coup. His predecessor, Zine El Abidine Ben Ali, allowed the plaque to remain.

The embassy serves as the only consulate in the United States, which is unusual for a country its size, and for one with such a lengthy history with the U.S. A renovated consular section greets visitors when they enter the embassy, and stunning wall hangings drape otherwise drab walls.

About
Molly McCluskey
:
Molly McCluskey is an international investigative journalist and Editor-at-Large of Diplomatic Courier. Follow her on Twitter @MollyEMcCluskey.
The views presented in this article are the author’s own and do not necessarily represent the views of any other organization.
keep reading
More on
Diplomacy
//
View all
Breaking News
Channel |